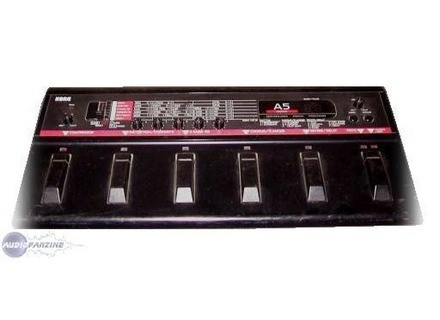 A5, Multi-Effects for Electric Guitar from Korg.

View other reviews for this product:
The pedalboard is made of plastic (it weighs about 5 lbs) and has a somewhat old look, which is normal since it is old!!!!

Plus a 3-band EQ and a noise gate.

It's a board that allows you to record up to 5 presets max.

Very simple connection options: One mono in, 2 outs and an input for a volume input, a headphone output, period!

It's relatively easy to dial in when using the pedalboard.

You can eventually manage to record presets without struggling too much, but it's not that straightforward, especially since not many people still have the manual around, considering the age of the pedalboard. (the manual isn't available on the manufacturer's website...a pity).

Factory presets (5*4 = 20) are pretty lame. You can't switch between factory and user presets while playing because, in order to do that, you have to engage a fragile sliding switch.

Effects are the biggest disappointment of this unit...They are outdated, to say the least.

Compression is non-existent (I never really heard a difference between the "raw" sound and the "compressed" one).

The distortion sounds are really bad (and I'm been kind here!) Actually, my first amp, a 10W yamaha is better at it. So, yes I think I can say it sounds awful!

Fortunately, the flanger and delay are much better and they are really interesting.

I used this pedalboard for...about 4 years, I think, with a metal zone for distortions.

It was my first board and it wasn't expensive. I sold it later on.

It was okay for the price and I never really regretted my choice.. Effects weren't that bad for the price (except for distortion!)

I don't think it's a good choice live, due to the cutoff when switching presets. (unless you only use a single preset per song)
In my experience, I wouldn't buy it again, although it's a good way to start out with a pedalboard for not too much money. It's very reliable, I never had a a problem with it!

Don't spend more then $50 on it...There are better and less expensive options in my opinion.
Did you find this review helpful?yesno
Cookies help us improve performance, enhance user experience and deliver our services. By using our services, you agree to our use of cookies. Find out more.