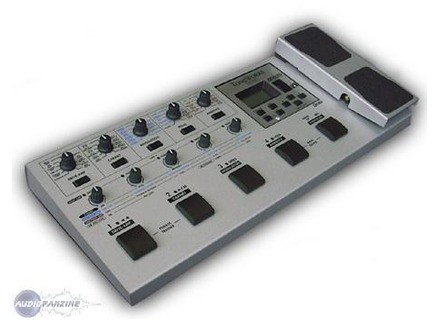 View other reviews for this product:
This corker was a present! But had I shelled out for it myself I would probably of expected to pay around £160 for it at the time. This particular model is most likely going for alot less than that now though.


First of all it's solid! It must be built using tank armour or something (or more likely die cast metal!) but in either case it takes a heck of alot of abuse. It has a clear backlit display with up to 8 black characters sitting atop a rather attractive tangerine screen, as opposed to that nasty red-on-black 'Casio watch' business you would find on the Zoom pedals. All the controls are rotary, so editing a patch is simply a matter of bending down and twiddling a knob. No sub menus and fiddly buttons here. The sounds themselves are superb. 11 Cabinets are on offer to you, (courtesy of Korg's REMS technology) ranging from small 1x8 open back practice amps, all the way up to closed back 4x12 monsters. The effects are of equally high quality: Flanger, 2 types of Phaser, 2 types of Chorus - mono and stereo, Octaver, Pitch Shifter, Modulation Delay, Autowah, Auto-filtron, Tremolo, Sample-n-Play, UniVibe, Filtron, Wah, Talkbox, Ringmod...and I'm sure I missed a few out but you get the idea. Plus the reverbs are some of the highest quality I have heard from ANY multi FX pedal, and even show up some dedicated digital reverb units out there!


Yes there are a few gripes. The expression pedal cannot be manually assigned to an effect parameter. The 'gumph' for this box states that there are 22 types of effect, when actually, around half of these are just the regular bunch of effects, but duplicated and assigned to the expression pedal block. It would of been nice, for example, to set the pedal to control drive amount, or reverb mix for example. So you are a little limited in this sense.

The preset banks are okay...I guess. But I would rather they had just given me an additional 40 blank patch slots, rather than throw me 40 average sounding presets which I'm never likely to use.

There is a rather noticeable delay when switching patches. Thankfully you can get around this by using the 'individual' mode to turn specific effect blocks on and off, as opposed to switching patches entirely. And I'm aware that this is a problem which plagues many effects units. But still it would of been nice had they fixed this little problem. It also rears it's ugly head when returning the expression pedal to full-back on the RingMod. Again, nothing major but it is noticeable.

The EQ is also a little simplistic, offering only rather crude 'bass/middle/treble' controls. Although I'm sure this is the case on alot of similarly priced units, it does leave alot to be desired.


As said earlier, the quality of the unit is fantastic. The actual body/chassis is made of metal, and could probably take a good stamp or two before it showed signs of giving. Whether or not the flush-plastic display would fare so well is another matter, but then why would you want to stamp on it anyway?!

The rotary controls are made of a rubber/plastic compound so you can always get a good grip on them even towards the end of a gruelling performance, and safely make all nessacary changes with your sweat soaked mits. Similarly the expression pedal offers plenty of traction by means of a rubber grip plate.


All in all a great piece of kit. It has served me well both in live performances, and more importantly, in the studio. I have access to some of the finest amp/cab modelling software out there but I always end up going back to the Korg simply because it's so quick and easy to use, and you'd have to try pretty hard to make a bad sound come out of it. The range of tones on offer is limitless, so whether you intend on playing some Benson-esque licks, or chugging away in a palm muted nu-metal frenzy, it's all there at your fingertips. Sure it's not perfect, but heck if you wanted perfection, you'd probably be shopping around for studio level rack mounts right? For £160 - scratch that, UNDER £160 you can't go wrong. It's durable, versatile and intuitive. Do yourself a favour and check one out now!!

**Note: The Korg AX1000G has been re-launched as the AX1500G. The features are the same, but with the addition of 2 channels per-preset, solving the patch switching problem, as well as additional storage space for your patches! Sadly...I do not own one.