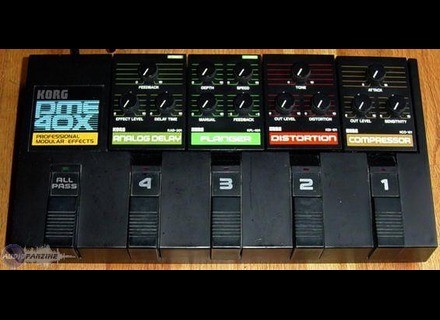 Value For Money : Excellent Audience: Anyone
For a long time I thought this thing was just another failed guitar system from the 80's, and superficially it is, but now that I've had the chance to plug a variety of synths and drum machines into a bunch of different modules I have a very different take.
There are some clues to its pedigree in its basic design:  Semi-modular, 15v rails, line level, dense (esoteric) internal circuits, and a 1983 release date.
It also turns out that the PME 40x was designed with the help of Hiroaki Nishijima, the same brilliant guy who gave us the Korg MS-20 semi-modular analog synth.  The MS-20 was produced from 1978 to 1983.
Not so coincidentally Yamaha released the DX7 in 1983 and essentially killed the demand for analog synths. As the PME 40x started production in 1983 it's not a giant leap to assume that some of the circuits and left over parts from the MS-20 were likely adapted to this format at the end of its life cycle.  I don't know the MS-20 well enough to comment on specifics, but the resonant filter embedded in the 'Dist Wah' module for the PME sounds authentically "Korg" from that era - just as powerful as my '86 Korg DSS-1 if not more raw in tone.
I'm now thinking the PME 40x was originally intended to be a synthesis / studio effect system, built from the ashes of previous tech they had on hand as the analog synth market crashed, and then re-ported into a contemporary video game cartridge style "pedal" format in hopes the guitar market would run down their surplus inventory.
Pure speculation in the end but I find this sh_t fascinating.
Previous to the PME I had been using an Ibanez UE-400 & UE-405 for analog effect processing.  They are exceptional and I have a lot of love for that setup from many years of jamming anything BUT guitars through them.
My recently formed opinion is that the Korg system smokes them on a number of levels.  The effects are more powerful, have tons more creative variety in both function and routing, and generally have a familiar "pro" sound quality to them.  Some of the analog effects are so clean they almost sound digital, and that's probably what the designers were going for at the time.  I also suspect some shared technology between the 'Digital Delay' module and some of Korg's other delays of that period, again the DSS-1 comes to mind.
In comparison the Ibanez units are more subtle, more natural, and you have to compensate for the bottom end being left out by the somewhat narrow bandwidth.  Where the Ibanez does out shine most is it's analog delay and chorus.  I also appreciate the rack format with the detached pedal.So far I have been able to play with the following modules for the PME 40x:  Comp, Graphic EQ, Gate, Phaser, Flanger, Chorus, Analog Delay, Digital Delay, Distortion, Dist Wah, Wave Shaper, and the Octave V.  Have not used the overdrive, digital chorus. or external selector.
For the creative sound explorers the ones to find are the Dist Wah, Octave V, and the Digital Delay with its Hold feature that can turn a simple sound inside out with ease.  The analog delay, flanger, and phaser are superb and outclass a lot of modern incarnations. And don't underestimate the boring old Graphic EQ, the high octaves can make things cut right through or subtly sparkle.
Not likely going to happen anytime soon but I would love to find two of each and then run them in true stereo!
Did you find this review helpful?yesno
Cookies help us improve performance, enhance user experience and deliver our services. By using our services, you agree to our use of cookies. Find out more.