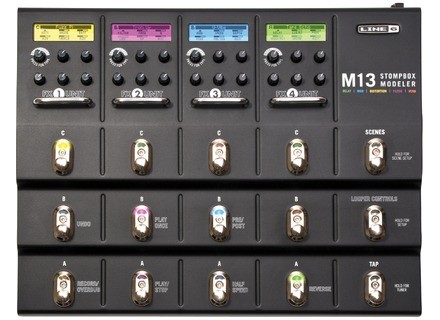 M13, Multi-Effects for Electric Guitar from Line 6 in the Stompboxes Modeler series.

Buy this productView price information >
View other reviews for this product:
First let me say I’m a computer artist by trade so I’m not allergic to the digital world and I actually love technology and see it as just another tool in the box. That said, when it comes to guitar gear, I have to admit I’m a bit of an analog purist. Not a hard core analog snob but that’s where I tend to lean when I taste test gear. Back in the 90’s I had a few pieces of Line 6 gear, some were keepers some went on their merry way. The ones I used the most in my band at the time were the green DL4 and the blue MM4. I thought those pedals worked great for what I was using them for and to be honest at that time I hadn’t really been exposed to too much of the world small pedal builders so my pallet was bit limited but they sounded good to me. Fast forward to about six months ago……and the passing of the recent years where the internet brought small builders to people like myself who hadn’t heard of them, I had a board with some very nice analog pedals. I had spent a good bit of time finding the right order and wiring them up with a cabling kit from Lava Cables, which are great by the way, in a way that was as painless as possible to switch pedals out. My board was sounding really good but being a player that likes to experiment on my off time I found at times I wish I had the ability to change the order or have two of something but that’s just the limitations of that set up. Then Line 6 came out with the M13 and remembering I liked the DL4 and MM4 it piqued my interest. Over the years I’ve figured out you don’t jump in right at first on the latest greatest, especially when it involves software, so I sat back and waited to hear what other people were saying about the M13. The reviews were actually pretty good so I bought it from a place that gave me a trial period. After about a month of going back and forth I took quite a few analog pedals off my board.

I found it very easy to navigate. That's one thing I really give Line 6 credit for and that's they really take care to find a way to make their stuff very user friendly. The bypassed signal didn't color my tone at all which is one of the things I look for in pedals.

So by me saying this it would probably be safe to assume “for me” the M13 really did sound as good as my board full of analog pedals. NOPE! That wouldn’t be totally true. I’d have to say it was a surprise that M13 didnt color my by passed tone, which is important to me and many digital effects fail at that. The functionality of having the ability to have different scenes of pedal layouts in any order I want, tap tempo on multiple effects at once, continuous control over some pedals parameters all at once, on the fly pedal changing in the scenes, and a cool looper…… all that tipped the scales for me. Yes there is a tonal difference I heard when comparing the modeled pedals to analog ones but for me I had to compromise that for functionality because that is important to me too. Also the tonal compromise wasn’t huge either. Well if the M13 worked for me that well, why do I use the “outboard” drives? Because I’m still an analog lover and love the way they sound. I do use some of the drives in the M13 also but I liked these drive pedals more

Will I not buy anymore analog pedals? Heck no! I still love them and will play them. Actually, I’m going to learn to start modding pedals here shortly so I still have a great love for those little boxes and pull for the small time builders who put their love and artistry to work in them.Honestly, if you aren’t a player who likes to have a very wide range of options when it comes to effects and their order then I think you could be very happy and get a better tone with a few analog pedals. But if you are a player like me who likes to not be as locked in when experimenting and wants to reduce tap dancing then I think the M13 is a great piece of gear.
Did you find this review helpful?yesno
Cookies help us improve performance, enhance user experience and deliver our services. By using our services, you agree to our use of cookies. Find out more.