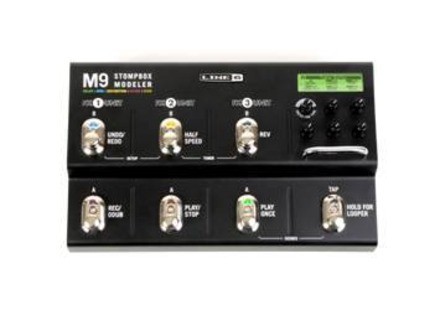 M9, Multi-Effects for Electric Guitar from Line 6 in the Stompboxes Modeler series.

« Great solution for a messy pedal board »
4

Buy this productView price information >
View other reviews for this product:
The M9 contains over 100 effects, a 28-second looper, and a dedicated tap tempo button. The effects are 6 categories: delays, modulation, distortion, compression and eqs, filters, and reverbs.

I don't believe there is an external editing program, but with how easy the M9 is to use I don't see the need.

The M9 is made out of metal and seems really rugged. The buttons are plastic and worried me at first, but after months of using it they've held up and show no sign of wear.

I cannot imagine a better implementation than what Line 6 has done with the M9/M13. Whenever you choose an effect to edit you just turn some knobs to tweak the sound and the M9 automatically saves your settings. Its as close to an actual stomp box setup as you can get with a modeler. Its beautiful.

There are 24 scenes, and each scene stores 6 effect presets. You can run up to 3 effects at once. its very easy to switch between scenes.

The manual is very straight forward and easy to understand. And on top of clear instructions it has an overview of all the effects in the unit.

I've mostly used the M9 with guitar, but I've also used it on vocals. It sounds awesome for the most part, especially for delays and verbs. The most disappointing part of the M9 is the distortions, hands down. For the most part they're buzzy and unusable. But everything else is gorgeous.

The most surprising part of the M9 for me was how transparent it is when bypasses. In true-bypass you cannot tell the difference.

Overall, the Line M9 is a very solid piece of gear. The effects sound gorgeous and its very easy to use. Great for stage and studio.

I think its a great value for the price. To get stomp boxes to cover all the bases the M9 does would take thousands of dollars.

I've owned the M9 twice, the only reason I sold the first one is because I needed the cash. Its the most convenient and best sounding solution for my effects needs, and if I have to sell this one for some reason I will buy another down the line.
Did you find this review helpful?yesno