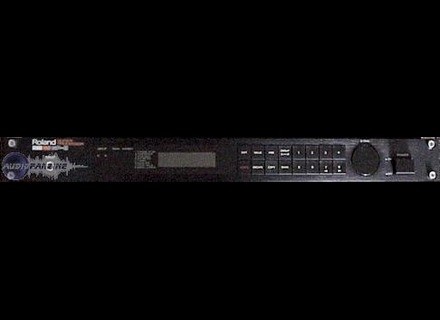 GP-8, Multi-Effects for Electric Guitar from Roland in the GP series.

View other reviews for this product:
Nothing to add to what has been said before on this point ...

ah, yes! ... it is the only multi-effects built as an assembly of pedals boss on the same circuit, not a complete emulation by a single DSP, as now.

suddenly, rub shoulders and digital delay effects if not zero analog (as opposed to the DSP 16 where everything is digital ... and poop!).
in my opinion, there are still things interresting bcp (including distortion!), but you need a speaker simulator behind any (even in the ordo for example).
he deserved as a noise gate on some patches and a reverb.
Finally, its presets are 80 years ... and they is not everything (including metal disto not really present).
to cheap, it's still useful sometimes (stud, including loops or synthesizers).
on stage or in the first purchase to versatile a. .. more versatile! ... tj but not as "dynamic" (I find that some existing multi-effects are the "imitate" a little smoother ...).

Everything is simple (as it is aligned pedals).

The chorus, the delay is not bad.
some distortion too.
is a device that can be creative in stud, including the hijacking, and which may please those who make the eighties revival.

the sound quality is not zero but does not necessarily satisfy those who seek its current and versatility (and whammy effects, dunlop wah, amp simulations, harmonic intelligent, etc ...).
and it lacks a noise gate ...

Given the price at which one can Toper, it can be fun ...

I bought the pedal f 7500, at the time.
at the time was a killer and I do not regret my choice.

What do you want me to tell ...
it still has a pretty face in a rack!
come on, like ... j'mets October 1 !!!...
hey hey ...
See the source
Did you find this review helpful?yesno
Cookies help us improve performance, enhance user experience and deliver our services. By using our services, you agree to our use of cookies. Find out more.