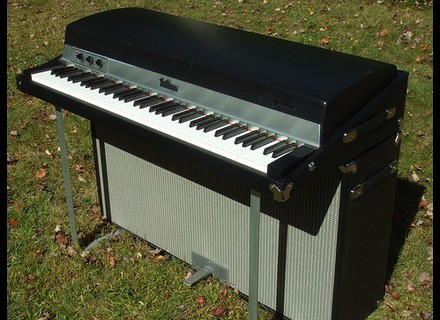 Rhodes Mark I Suitcase Piano, Electric Piano from Fender in the Rhodes series.

View other reviews for this product:
What thing do you like most/least about it?
The best thing about the Fender Rhodes in my opinion is the tone. It is a very unique keyboard that's been a favorite of all kinds of musicians for decades. It's got a rich, fat sound that is different from an acoustic piano, mainly because the hammers strike tines instead of actual strings. The sound has more of a bell-like quality than a Wurlitzer.

Did you try many other models before getting this one?
I didn't try any other models when looking for this. There's really nothing to compare it to unless it's replicating the sound of this instrument, in which case it's not worth it, because nothing I've heard does an accurate job. Lesser men will say that a Wurlitzer is better or that the Rhodes sounds like a Wurlitzer but the tone is so different in my mind that they aren't really comparable.

What is your opinion about the value for the price?
Honestly, the instrument is the only one of its kind, so finding a good deal on it is definitely the way to go. There's not a whole lot of other options out there, and if you know you want the Rhodes, you have to get one eventually. I've seen them go for about $2,000, which in my mind is totally worth it.

Precision and quality of the sound?
The sound is arguably my favorite keyboard sound; it's rich, smooth and "creamy". It's definitely got more of a ringing, bell-like quality than the Wurlitzer, and it usually is less dirty than that keyboard. This can change when it is played through an amp, which also gives it a great tone that's distinct from going through a DI. Through a Fender amp the tone gets a little crunchier, which some players prefer. It's definitely great for jazz (especially fusion and jazz from that era, mid-to-late 1970s), R&amp;B, and even rock; Steely Dan used it a lot on their recordings. It's been used by Herbie Hancock, Chick Corea, and countless others. You've definitely heard it on many recordings, whether you realized it or not. I can't say enough about how great it is, it's one of a kind.