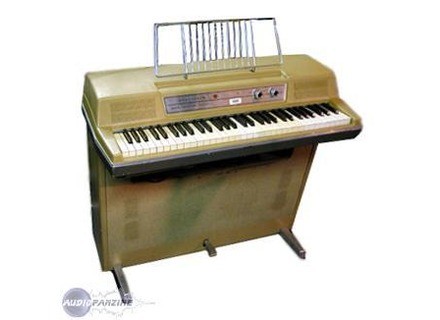 206 A, Electric Piano from Wurlitzer.

View other reviews for this product:
The Wurlizter 206A is an electric piano in the classic 200 line of pianos made by Wurlizter.  It is pretty similar to some of the other electric pianos in this line, as it has the same make up of the 200A, having two knobs for volume and for the rate of the tremolo effect.  The main difference between the 206A and the 200A is that the 200A has no lower body to it like the 206A does.  The 206A has a sustain pedal built into the casing, while the one on the 200A is connected to the back of it.  Beyond comparing it to the popular 200A model, the 206A has a great sound in its own right and is very comparable to any of the best models of the Wurlizter electric piano.  The only down side to this model is that it does have the large casing and is therefore much harder to transport than some of the other models of this piano.  The good part about that is that since these aren't as highly sought after, the price for a used one of these is cheaper than the others.  If you only would use an electric piano like this in the studio where it can be stationary or simply aren't looking for one to bring around for gigs, the 206A is as good a sounding model as any of them.  It has the classic sound that you would look for in a Wurlizter electric piano, which is one that I truly adore.  I only really use this piano for recording, so it really works out for me and is a great asset in the studio because of its awesome tone quality.  If you are looking for a Wurlizter electric piano and don't want to spend all of the money to get a 200A or one of the other most popular models, the 206A is a great substitution and I would highly recommend checking it out as it is simply a great instrument.