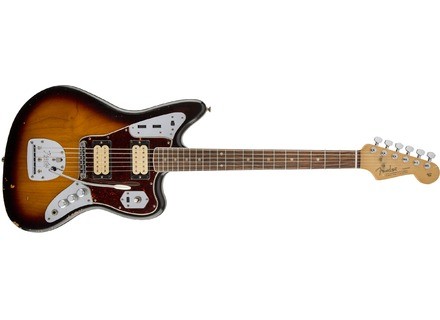 Come on people now! Smile on your brother. Everybody get together. Try to love on another right now! To celebrate the 20th anniversary of the launch of Nirvana's Nevermind, Fender presents a reissue version of the guitar bought by Kurt Cobain a short time before the recording of this album.

A collector lent the original guitar to Fender, who then decided to manufacture it in Mexico. Before its launch, Kurt Cobain's Jaguar got a lot of people talking, especially due to the possible incompatibility between the "grunge spirit" and the signature and relic guitars trend. So... is this guitar a real instrument or a shameful business idea using the name of one of the most popular lefty rock icons.

Originally designed for surf musicians, the Fender Jaguar was introduced as the leading product of Fender's electric guitar range in the 60's. The guitar had two independent electrical circuits: a lead stage with volume and tone controls plus three switches (two switches for pickup on/off plus a low-cut filter to create a very sharp sound). Accessible via a switch on the left part of the guitar body, the Rhythm stage offered additional control for the neck pickup through the volume and tone knobs. But the Jaguar had little success and disappeared from Fender's catalog in the 70's. Even though this guitar had a vintage touch already in the 90's, the Jaguar (as well as the Jazzmaster and Mustang) was still rather inexpensive then. But after the grunge wave, and especially due to Kurt Cobain, its price went up and Fender relaunched production. The famous Jagstang — an hybrid between the Jaguar and a Mustang (Cobain loved it), that was actually developed by Fender and Kurt himself — also comes to mind. But the musician wouldn't have too much time to enjoy this honor and decided to take his life some time after receiving the first prototypes.

Come as you are

But let's have a closer look at the Kurt Cobain Jaguar. The body is made out of alder. The 24" scale maple neck has a rosewood fretboard with 22 frets. It has exactly the same features as the original. The bridge is an Adjust-O-Matic, and the Jaguar-style tremolo has a locking option but no damper (to allow to mute the strings mechanically). It has a Road Worn finish, a sort of quality standard for Fender relic guitars made in Mexico. The neck heel plate even shows a Fender logo drawn by the hand of Kurt Cobain (even he was "corporate"). The new features, which were already available on the guitar bought by Cobain, are: humbuckers (DiMarzio PAF in neck position and Super Distortion in bridge position) to replace the original single-coil pickups, a Gibson-like three-way toggle switch (goodbye low-cut filter) instead of three switches, and an additional volume control. As a result, you still have two independent circuits. The Lead stage offers a volume control for each pickup, an overall tone control and the three-way toggle switch to select the pickups. The Rhythm stage uses only the neck pickup, which is still controlled by a pair of tone and volume knobs. For example, you can switch instantly between two different neck-pickup settings, or cut the neck pickup in the Lead stage (the toggle switch becomes a kill switch) and instantly switch to the Rhythm stage without having to check if you forgot to increase the volume of the neck pickup! Useful... The guitar is a kind of high-end Mexican guitar: it doesn't give you the usual impression that you are playing an instrument with average quality and finish.

I belong to the Nirvana generation. So, the supernova that was Kurt Cobain's career influenced me more or less, even if I really discovered Nirvana's music a long time after the band split. As you can imagine, I was very excited and also a bit concerned, when I started to play this guitar. And it didn't disappoint me. In the past, I have already owned several "lesser-quality" Mexico Jags, so I was immediately surprised when I held this guitar in my hands for the first time. First of all, the weight is much higher than that of every other guitar made by Fender Mexico. A second look quickly reveals the sturdiness of the construction and the wood's hardness. For example, the neck didn't bend at all when I tuned the E-string several tones down. I pounded the guitar with my hand to hear the resonance of the instrument, did some wild bends and strums to check if the guitar stayed in tune... and everything went fine. The whole guitar seems to say: "Don't worry!"

In clean mode, you'll immediately recognize the typical narrow and at the same time full Nirvana sound. The three lower strings sound a bit louder than the others, which is very nice for strumming so the higher notes don't take up to much space in the frequency spectrum. Efficiency first! The guitar is very easy yo play due to its short scale, low string action and rather flat radius (9.5"). Everything seems to be very well thought out for wild playing without detuning problems. Unlike old Strat necks, which can be very wide and bent, this guitar allows you to play really hard without paying attention to whether your right hand hits the strings too heavily or not... As a consequence, the neck of the Jaguar doesn't have the same dynamic range as a Strat neck... In short, the Kurt Cobain Jaguar is a guitar for strumming and arpeggios rather than for sophisticated blues/rock licks. The pair of pickups is well-balanced: the PAF on the neck sounds very round, while the Super Distortion adds several dBs and provides a very tight but not too bright sound. Combining both pickups you get a very nice and crystal clear sound.

In distortion mode, the guitar develops its full destruction ability. The simplicity and efficiency are still there and you don't need to worry about playing the wrong string or putting your left hand on the wrong fret. The length of the strings between the tailpiece and the saddles allows you to produce very nice noises with a lot of gain when you hit the strings in this area. In which case, the dual-circuitry electronic can become very useful. It's a real plus to have the possibility of toggling between a heavy-distortion sound and a crunch tone with one single switch. It isn't difficult to imagine the opposite: to generate feedback and then use the toggle switch as a kill switch to create all the noisy musical accidents that Kurt Cobain loved. The neck pickup is not very useful with very high gains because it sounds a bit too dull. The combination of both pickups produces a quite pleasant tone whose soft and warm character gives good results when in need of distortion.. The bridge pickup is no surprise: it has a reputation and everyone knows that high gain amps are its best companions.

I couldn't review this guitar at home, so I had to record it just like when it was presented for the first time, using a small Zoom H4 placed about 3 ft. in front of a Fender Supersonic Twin amp. Although Cobain didn't play with such amps (he mainly used Mesa Boogie at the time of Nevermind), which I find a bit too dark for Nirvana's music, I can tell you that even if this guitar doesn't come from the same tree as the original, it certainly has the same wood. I recommend you to compare the following sound samples with Nirvana's Live at Reading '92. The spirit is there!

Without having the same magic as an original '62 Jaguar (which would cost about $3,000 with custom pickups/electronics...), this Kurt Cobain signature is a very good guitar. Reliable, strong personality, beautiful, noisy, wild. The guitar is rather versatile but it is not made for guitar heroes regardless of music genre (jazz, blues, metal). This guitar will be the ideal partner for sound destroyers in music genres like pop, alternative, rock, post rock, etc. And of course, a lefty version is also available!