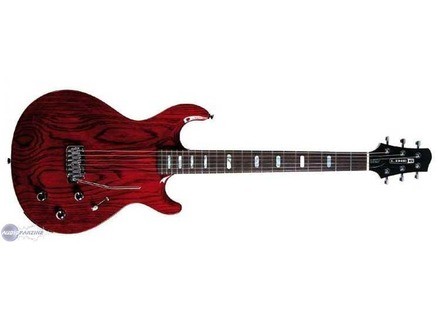 View other reviews for this product:
The Line 6 Variax 700 is a modeling electric guitar. It does not have traditional single coil or humbucker pick-ups near the bridge or neck of the guitar, rather it has piezo pick-ups built into the bridge of the guitar. The signals from the piezo pick-up are sent to a DSP chip to transform the signal into the sound of a bunch of different modeled guitars. This computer chip needs power to work, so you have to install batteries or send power to the guitar from the instrument cable. A standard instrument cable can be used if you use batteries, and the guitar basically functions like a normal electric guitar. A special TRS instrument cable is necessary if you want to power the guitar from the included power supply over a ¼” cable. It is also possible to use a special variax cable with a POD XT, X3, and HD. Not only does this cable allow you to power the guitar without batteries, it also allows you to program the effects pedal to automatically switch between guitar models for each ‘preset.’ Finally, the variax cable allows you to send a digital signal from the guitar rather than an analog signal. To illustrate this utility, consider a recording situation where you want to directly record this guitar through a POD onto a computer. With a ¼” cable, the guitar with convert the analog signal from the piezo pick-up into a digital signal for processing. Then it would have to convert the digital signal back to analog for the ¼” cable going to the POD. The POD converts the analog signal to digital for processing, then converts the digital signal to analog to be sent to an audio interface. The audio interface converts the analog signal to digital to record on the computer. With the Variax Cable, the guitar converts the analog signal from the piezo pick-up to digital. By using the Variax Cable, there is no need to have analog and digital conversion between the guitar and POD. You could even use a SPDIF cable from the POD to the audio interface to never convert to analog throughout the entire recording chain. This would give you the purest signal path for recording. Even analog to digital conversion causes the quality of the signal to be slightly diminished.
I know there will be some people that don’t like digital, and don’t like modeling. From my perspective, it is all about getting the best sound for the cheapest cost. I would agree that a $3000 Les Paul sounds much than the Les Paul model on the Variax. However, I can’t afford the expensive guitar anyway. Therefore, I have to choose between a $700 Variax and a $700 Epiphone. I own both of these guitars, and I can say that the LP model on the Variax sounds better than the Epiphone of the same price. To me, this is the value of digital modeling. Not to mention you also get 25 other guitar sounds included. I was skeptical before I tried one out. But now I would never record without it. I just need to save up for the James Tyler Series.