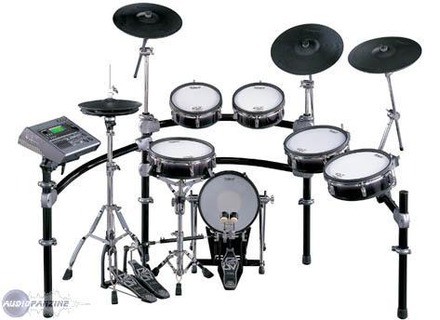 TD-20K, Electronic Drum Kit from Roland in the TD series.

Product replaced by the Roland TD-20KX.

View other reviews for this product:
I'm using the TD20 for 2 months, I Discoveries drumkit with Yamaha DTX electronic and quickly conquered trs I bought a Roland TD8 there is a 1 / 2 years to finally fall for the last of the Roland TD20 module.
My first impressions were Premire the admiration of the same module in it, trs esttique is covered mtal (brushed aluminum I think) that gives a good look, and a cot pro indgniable (relative to all other modules of plastic ...).
First of all we say but how do I connect the multitude of connections that can be found on the back of module? Indeed one can find in addition to 14 between pad or trigger, an output gnrale a Mix In, SPDIF, MIDI IN / OUT / thr, especially trs INTERESTED thing for the studio or scne, 8 analog output for Sparer bass drum, snare, toms, hi-hat ride ... This is one reason that motivated my choice.
Ignition module, (c whaou star wars ca lights everywhere) apprcie is primarily the large LCD screen that displays the information clearly (the quality of the LCD panel lets adsirer However, high latency. .. but not good c ca l'important)

It accde in DIFFERENT ways just trs (g not touch the manual) any self-evident.

Party Sound of bte:
I t bleuf by the sound module is impressive! A great trs Ralite in modlisation sounds. Despite a pallette of its narrower than the TD8 module. Indeed j'tait a little sad by the smaller number of sound lv gnral prenregistr sample but also the form of pieces into parts (about 150 songs on the several parts TD8 module against a sentence on the TD20 70 the most part by one party) And we can customize the basic drum kit 50 against 64 on the TD8.
But concrtement, 50 kit is more than enough, and the pieces are of much better quality!

Roland's COSM technology to Modl t sounds very optimistic we can for example change the size of the virtual cymbals ... but we also have a range of trs nice effect for each bank of sound. There are a comprsseur a qualiseur, a multi purpose, and an atmosphere changer. All this allows envellopper sounds great dj the module, a sound processing that gives the imprssion to be derived from a live or studio.

Complment test trs bientot ....
See the source
Did you find this review helpful?yesno
Cookies help us improve performance, enhance user experience and deliver our services. By using our services, you agree to our use of cookies. Find out more.