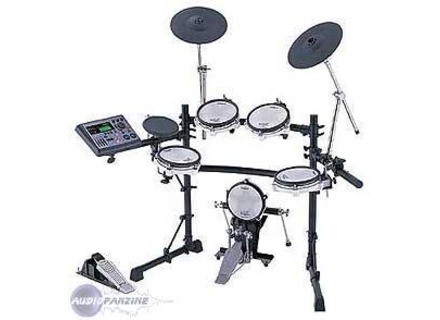 TD-8KV, Electronic Drum Kit from Roland in the TD series.

View other reviews for this product:
User for 3 years from the TD 8
I bought this type of drumkit because I wanted to learn this instrument in an apartment and told me that later I would have a sound. I also tried the Yam but hang.
It's expensive but it's true I could have it in mensual and do not forget that it is modular trs without touching anything you have 64 types of batteries fully r fast rules and sound, 2 Jack 2 and Dial directly to mixing desk, the Ir sound is a little relieved and you constriuisez with some exprience your sound that can grace the function of chaining be modified easily for you DSIR diffrent environments bring different song.
What about the calm rpetitions in small rooms where you can play at Modra and thus allow guitar and amp to the vote not to force, it is amazing how the music is beautiful when you do the shoot not only dtails.
In any fawn scne if you play, you will be picked up by microphones to the mixing desk so the beautiful sound of your acoustic dpendra the mic and Ir that deal, it is sometimes comical.
I do not dtach this hardware but it is true that the sound without amplification in the small club, which motion and physical sensation. What you do not with the electronic even if your return is nickel.
For tanks, I dj with the hardware is fine scne, such as Franco Spa, scne Fnac, without any problem and I assure you a ton still the sound that comes out of this "little thing". Is lost in look but gaining in surprise.
The most ngatif are certainly CONTRL HH and the diversity of sounds that can be a single cymbal from a vritable.
See the source
Did you find this review helpful?yesno
Cookies help us improve performance, enhance user experience and deliver our services. By using our services, you agree to our use of cookies. Find out more.