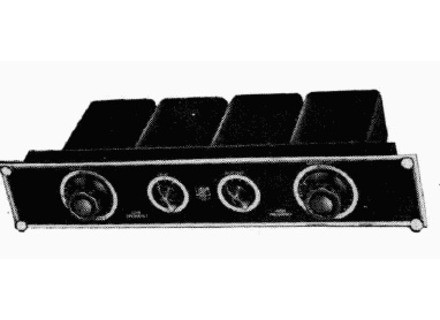 3A, Filter from UTC.

The UTC 3A is a passive, two band equalizer that can be used for a variety of purposes across the board. First off, this is a really old piece of gear! You're definitely not going to find many of them, and those that you do find will probably have some sort of issue with them. The studio that I work at has a set of these, but they had to be fixed and restored and only recently have made their way out for use. These are all analog equalizers and will fit in two spaces of a traditional rack case.

Using the UTC 3A couldn't be much simpler. It's just got two bands that each have parameters for setting your cut or boost level and for choosing the frequency. The low band gives you three different frequencies to choose from, while the top band has five. Those are really all of the setting controls at hand, so a manual shouldn't be needed nor do I think you'll have much luck finding one.

While definitely not the most flexible equalizer out by modern standard, the UTC 3A has a really great tone and can do a lot if you're looking to add or lose some high or low end. It was probably originally used for broadcast, as the demand for studio gear was certainly a lot less when this was made as it is now. It works as both a mastering and mixing gear, and is especially useful as a mastering device as is the case here at the studio where I'm working. Small moves on the UTC 3A seem to work wonders for your sound, but you have to know where to use it as it's got a somewhat limited scope since you don't have control over the full spectrum of frequencies.

I don't know if you'll be seeing any UTC 3A passive EQ's out there anytime soon, but if you do come across one in a studio or elsewhere it's definitely a good piece of gear to know about. This is one of the oldest equalizers I've ever used or seen, as I think it was made as early as the 30's or 40's from what I was told. It's probably not worth pursuing since it's so rare, but if you do get lucky with one it's a really great sounding, simple two band EQ for mastering and beyond...
Did you find this review helpful?yesno