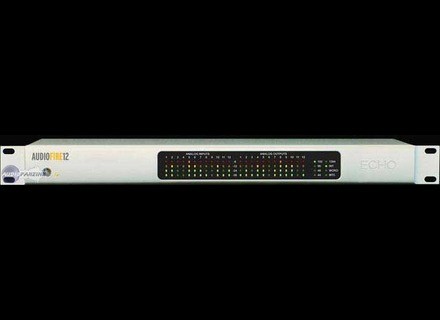 Audiofire 12, FireWire audio interface from Echo in the Audiofire series.

Connected to a mac (Logic) with firewire, it should of course add preamps but from my point of view this is an advantage because it gives the possibility to choose several different colors, different qualities ... choose your péamplis whatever.

No problem to install it I had problem with cons of "clicks" strange noises. This is a problem ... I think buffer but can ruin a take.

Its default: no headphone output ... it would take at least one!

I would do this choice.

Stable drivers on mac
Logic 9 and it works. Audacity crunches (you must know where to change the buffer ...)
12 tracks simultaneously.

No problem to install cons I mismanaged buffer sizes.

2 years.
I had several cards, and other ente motu I prefer my audience.

Q / P: super!
I would reiterate yes. To mount as you have to put a lot of extra money.
See the source
Did you find this review helpful?yesno
Cookies help us improve performance, enhance user experience and deliver our services. By using our services, you agree to our use of cookies. Find out more.