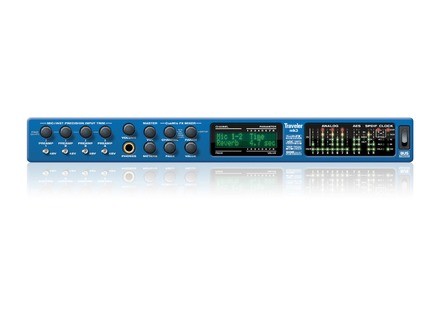 Traveler-mk3, FireWire audio interface from MOTU in the Traveler series.

Buy this productView price information >
View other reviews for this product:
The characteristics are well described elsewhere.
I bought it to replace a MKII Traveler: DSP functions interested me.
The EQ is very effective. The signal analysis functions are handy.

Nothing to say about the use of: operating systems run on Mac 10.6.4

The microphone inputs are noisy under 48v. Another new card had the same problem. The card is part of SAV in August 2010 (French official importer sends the U.S.). She did not return to 23 January 2011. The importer does not respond to messages or the mail.
Map

very effective, the only model standalone-dsp before the release of EMR Fx
Importer inadequate for professional use. It's money blocked. Avoid it.
Motu is done under these conditions. To avoid
See the source
Did you find this review helpful?yesno
Cookies help us improve performance, enhance user experience and deliver our services. By using our services, you agree to our use of cookies. Find out more.