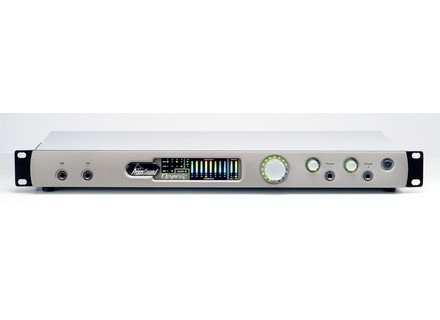 Value For Money : Excellent
View other reviews for this product:
It is the pleasure of listening to music, especially mine, in the best condition possible hearing within my reach, which prompted me to buy this machine.
In terms of connections, it is perfect for my little studio that records a person or an instrument at a time.

I use Cubase, Wavelab and Adobe Premiere. He planted several times. I had to reset it a few times too. I think the drivers of my SSL Duende returned in conflict with those of Orpheus ... or is it Mac OS X that silliness more often when the stuff comes out or at Avid (Pro Tools, Media Composer ...), or Apple (Logic, Garage Band ...)?
Few updates. One, I think, since I bought it.
I do not have figures for latency, I know it is below than my day Delta 66, while remaining perfectly acceptable.

No particular problems during installation.
The configuration is not the most intuitive. M-Audio is doing much better on this point.
The manual, I read ... how to reset the machine in case of crash.

I use it for 3 years.
Before I had an M-Audio Delta 66, which was excellent for the price. I made a comparison between the output of the Mac Pro, that the Delta 66, that of Orpheus in SPDIF and analog Vovox by Monster Cables and connectors to my LSR4328 speakers.
The difference is especially noticeable in terms of presence and topography of sound in space.
Worst: the Mac Pro output. Impeccable ... for the HiFi.
Then, out of the Delta 66 sound more presence, undoubtedly. For broadcast, it's perfect.
Then, pretty much, the SPDIF output of the Delta 66 and that of Orpheus. Note that LSR have very good DA converters.
After the analog output of the Orpheus via Monster Cables: audible difference from the first second. The sound has more depth.
Finally, the analog output of Orpheus to the LSR via cables Vovox symmetrical. Its presence similar to Monster Cables, but a much greater clarity over the entire bandwidth and overall level of precision that stunned me at first. Now, okay, but I think when one is not accustomed to such a level of sonic accuracy, it requires a period of adaptation to the mix.
All that to say that in order to take advantage of such a machine, you must ensure that the elements of your channel input and output agree that you are not using unbalanced cables for example, or other converters less sharp, such as powered speakers or a lambda preamp.
To tell the truth, I find it cheap for such a quality sound, but it seems that prices have increased since then, am I wrong?
With the experience I would do this choice without hesitation, hoping, however, that the beast is more stable.
See the source
Did you find this review helpful?yesno
Cookies help us improve performance, enhance user experience and deliver our services. By using our services, you agree to our use of cookies. Find out more.