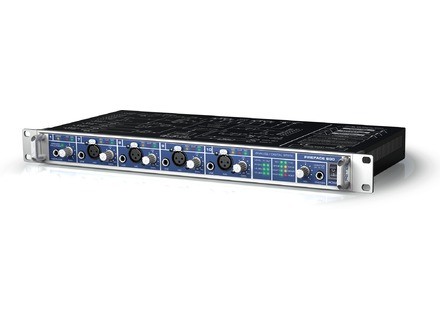 Firewire transfer not always stable and that poor compared to my motu 2408
Incompatibility at the synchros. Test on a G5 mac bipro, driver problem
Configuration siimple but other than that quibble over problems of malfunction
Manuel a bit light

Drivers unstable, I have to reboot and reinstall quite often also quite often (I tried on 4 different PC and it's always the same problem
A big problem of latency as compared to a motu 2408 which is pretty cool the top
the sound is really lacking in scope, it is a bit dry and tight and do not expect to mix with this card, I find that it lessens the mix, serious!
The motu 2408 is cheaper and much better. Otherwise, to 450 euros, esi quatafire prefer, which is not bad for 3 more times cheaper.

I work in a studio pro or a lot of stuff is regularly tested (often just to try, mlus low to high) and in the order I put Pro Tools, MOTU 896HD, MOTU 2408, Esi quatafire, and long after RME (I am not paid by the competition, you worry, but there is a kind of snobbery around the map, kind of, it was German so it's good, but no, jomox is good, but not RME!
See the source
Did you find this review helpful?yesno
Cookies help us improve performance, enhance user experience and deliver our services. By using our services, you agree to our use of cookies. Find out more.