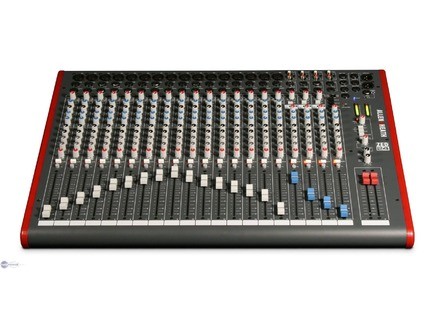 ZED-24, FireWire/USB/mLan Mixer from Allen & Heath in the ZED series.

Allen & Heath has announced that the new ZED 4-Bus range of small format, USB-equipped mixers for live performance, recording, and production is now shipping and available in stores.

We're told that the new 4-Bus Series is similar to the smaller ZED-14, the 4 bus series features the same DuoPre TM padless preamp, which is a quality microphone circuit and an optimised line input circuit, rather than one pre-amp handling both mic and line signals. It uses a two stage design with carefully controlled amounts of gain in each stage, offering high headroom and a low noise, clean signal path.


ZED mixers feature a USB send and return for PC or Mac recording, playback and effects; a dual stereo input capability; and monitoring facilities. ZED's USB output can be configured to allow different signals to be sent to USB, from the LR master, the matrix or the aux busses, with the USB return signal available as a stereo return.

Cakewalk's SONAR LE music production software is bundled with ZED mixers. SONAR LE software is a Digital Audio Workstation that runs on Windows Vista and XP, and includes 2 instruments, 6 MIDI effects and 14 audio effects. The combination of ZED and SONAR LE allows the user to conduct a straightforward recording of a stereo mix, record tracks individually to build up a song, or insert an FX plug-in from SONAR LE.


The full range of ZED mixers is currently shipping and available.

For more information, visit their web site at www.allen-heath.com.