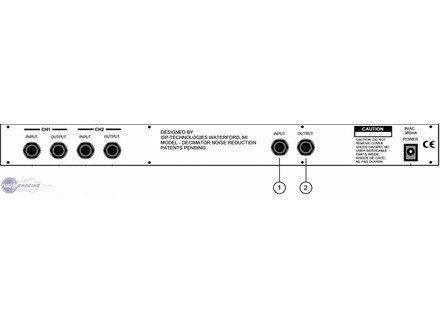 View other reviews for this product:
Written by glpg80 on rig-talk.com

there is filter tracking control with a very small knob on the left side of each channel. used for the time vector processor, from what i have used with the unit so far, it controls the signal inside the unit and how the unit responds in attack and how much control is actually allowed by the noise gate vector processor. set too high it can rob tone and start to cut out the guitar signal and noise both. it seems to be a setting for how far behind the noise gate follows you. faster rhythms would want a higher setting, slow decadent players and searing solos would probably like this set lower or off. it has nothing to do with the actual noise gating, but the control of the vector processor itself. i tend to leave it at its lowest setting of -20, as i can tell a difference in the clarity of notes when doing a solo or any long runs below the 12th fret.

next is the in/out bypassing control of each channel. it has a little of a pop on my unit when going back in forth with the effects loop of the amplifier. but it is extremely hard to notice the unit once it is set properly to your liking. the buttons feel a little cheap and are not the most durable contruction.

the threshold controls are the largest controls for each channel, and have independent LED gain reduction indicators to let you know when it is working and when it is bypassing on the fly in real time which is pretty cool. the lower the threshold the more obvious the processing of the unit is audible in cutting out noise. the higher the setting the more gain reduction you get and the less you hear the actual processor cutting out noise, but the more tone you lose at the larger settings. i have found this can actually be used for shaping the gain of the amplifier itself, but can also rob you of your low-end if set too high. i lost the punchiness of my amplifier in its capability to "breath" with the cabinet when i had it set where i like it. the unit does let the amplifier breathe and it is still amazing, but it is still a reduction. if i had to rate the low end loss, i would rate it at a 1.5 out of 10, 10 being the worst. what i tend to do is leave the vector processing all the way down, and then cutting the amplifier to extreme volumes and setting the unit there with the threshhold, the backing the threshold down a hair or two. thats where i find i like it most without too much interference from any perspectives while also doing an excellent job of being transparent when playing.

the LED's are bright enough to be seen across a stage without any problems. the unit is very light, and very well made.

i dont like the large adapter that the unit comes with. it is quite bulky but is required. just a small neusance i believe. i rate the unit a 10/10 in features and ability to control the unit effectively.

i would rate it a 9/10. i dont like the feeling of some of the small buttons. other knobs like the filter tracking which is very small and the threshold controls feel rock solid though. the bypass buttons feels very cheap and with commercial use im not sure i could trust it 110% like i do some of my other gear. still a well made unit. very thick front steel mounting plate.

extremely tight when it needs to be, and extremely loose when you want it to be. you can do all harmonics, tapping tricks, tapped harmonics, artificial harmonics, and very tight palm mutes without buzz, hum, or interference. it works great as a set it and forget it unit. i had no problems on all three of my channels. i purchased the unit for LIVE use and for band practice volumes. as long as the unit is set properly there wont be any problems at all. i was amazed at how well it tracks your signal and applies the envelope and gating algorithms. definately no worries for anyone who wants a no gimmic real deal noise gate that does not rob your tone and at the same time can actually benefit at higher volumes or in recording perspectives. i rate the unit a 9/10 for sound quality. the small stuff my amp does live is why i still own it. the noise gate tampers with this, but at the same time reduces noise tremendously at higher volumes, ESPECIALLY when effects are used which is exactly what it is supposed to do. its an even trade off i guess.

in recording the unit would be idealy 100% transparent, but live i CAN tell a difference in the low end of the amplifier. it is extremely transparent and does the job effectively. im sure most people wouldnt mind just turning their low end up. i love the ability to control the unit in all aspects and not just one knob. i also love how high quality and how effective it reduces noise at higher volumes. the ability to do harmonics, horsies, and feedback with the amplifier without any intereference makes this unit a wise and very helpful investment. i like it in the loop, and also out of the loop. for lower volume stuff i think i prefer it out of the signal chain which is easy to do with just the push of a button. 9/10