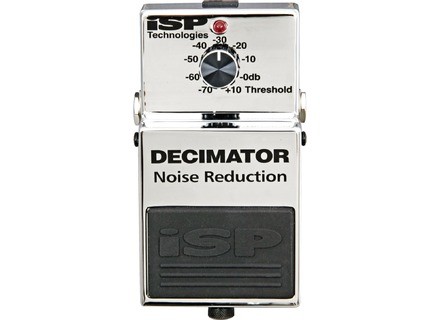 View other reviews for this product:
This pedal from ISP Technologies is meant to be a serious improvement on the typical stompbox noise gate such as the Boss NS-2, Rocktron HUSH, or MXR Smart Gate. It is laid out very similarly to a Boss stompbox with the same casing design and switcher. There is only one control on the pedal, which is labelled "Threshold." This basically controls the level at which the pedal is working and acting as a noise gate. It has single 1/4 inch input and output jacks, and is powered by a 9 volt battery or a PSA adapter.

It's also a mirrored pedal, how cool is that?

Very simple, yet very effective. This pedal uses a different technology than say, the Boss NS-2. If you're using the Boss unit and turn the controls up to combat noise, it actually can start to deaden your tone or suck it up because the gate itself is cutting into the actual sound. The ISP is wonderful in that it's very transparent and all it really does is remove noise. It doesn't cut into your amplifier's gain or take away any nuances from your tone like some other noise gates do, which is great.

I've used this pedal with various different amps, from clean to extremely high gain. Like I stated above, it seems to be very transparent and it does what it says, it is a seriously good noise gate. Using it with clean amps worked well to kill some minor unwanted hum without cutting into my tone, and using it with extremely high gain (and often very noisy) amps was great too, because it simply took the noise out of the equation, leaving all the gain/saturation and sustain so that the amp's tone still sounded almost exactly as it did before I put the gate into the equation.

All in all, I'm convinced the ISP Decimator is the best noise gate on the market, bar none. Compared to other stomp boxes in its price range like the Boss NS-2 or Rocktron Hush, there's no comparison. The other units just are left in the dust. At $150 new, it doesn't cost an arm and a leg either, and your ears will thank you when you have great tone without any noise or tone suckage.

Definitely worth the 10/10 rating!
Did you find this review helpful?yesno
Cookies help us improve performance, enhance user experience and deliver our services. By using our services, you agree to our use of cookies. Find out more.