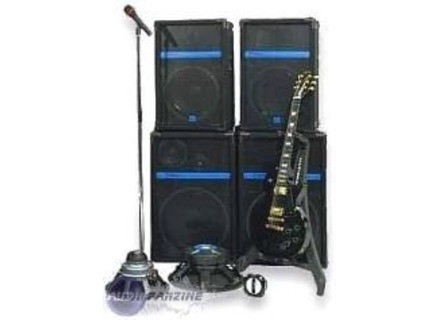 View other reviews for this product:
Good evening all! a review ptite After a few months of using my sound system made in B. Cord

may be useful to some.

Style:
- Group power-thrash with volumes of nag as you can imagine

Mission:
- In the first place, only recovery of the voice (but it is understood in spite of all barrouf rest of the group) and the kick in the sound system for use cif concert.

Mission Top nag:
- Back kick, bass, guitar and singing in the sound system to use those rooms 150/200

with respect to the normal mission, no problem, I panch dj on the subject on these same forums.

Top nag for the mission, here are my impressions.

gives a max! good was also unable to due to time by the balance grow well but the kick was taken up with a small micro stagg kick, with the comp / gate dbx rglages and some history to make the thing pretty slamming, c 'silent nickel! prsence good! I do not have good bones serious climbing since the 15Mi100, is not for the base. I jou on mdiums and treble. I took the guitar with classic sm57 scratch but since I was testing its new head amp, its not his n'tait trs point so I will vote on it.

bass, not much on hand, I saw the release of his head xlr and I transplanted one of his Alumabass 4x10 snare drum with my microphone shure bg2.0. the good is clearly missing Obviously serious. so I made sure to leave him a pretty slamming his mtallique typing and also in the midrange frequencies.

balance the whole story was a bit down the volume on scne (my drummer silent happy, he heard once more his return from ehe) and was reinforced in faade. for more homognit I pan the bass in the faade ct of the amp and back scratching for scratching. balance the whole story to the public at Spectrum aa cash without problem. even with the double donf, of the guitar power chords, hammering in the RULES mdiator bass and me on everything brmait, nickel! well I still think that the same lack of any substance but it's nit-picking! benefits for the small room of 150 people and / or cafés concerts, has more than enough! it will add no more than a
all fawn.
So verdict, despite a range frequency drives load midrange / treble that bastonnent, the PA has taken the road!
pttre just the bass at times disappeared between the double, the voice and the guitar (which really was not a terrible sound but good Saturday night c'tait his first concert with the new head. the id e he sought the pantera sound and we were left with just the sound of Cradle of Filth: - / trs therefore something garish and aggressive level midrange / treble, which puffed a little while).
I think the scratches with this its not a top place to eat a low max. then I think that for the low, nothing beats the same right subwoofers! but the fact is the good dj trs well.

We try again later fvrier end, a "spinning" further. we will play in a caf with the same type of config (room and all). I would try to take the kick with a real micro worthy of the name, a good Beta52A shure what

by the scratch we will also srement tamed his head and now I think we will play the more Manir what he did most of his so that its amp scne on a recovery in trslgre faade. and bass, we will do the opposite, a little less hard on scne and recovery grows more faade. should do a lot better.

I have no voice at fault! cel ds still I hear me singing it bah trs trs well and clearly. I can be just abuse at the peak limiter dbx. I think not having left margin, I placed five as I think the table Allen & Heath is far from saturation level. So there was a sense of lightweight crasis voice over certain passages hot.

o the day I sub for adding a subwoofer will kill everything I think!

Voil j'espre you have drunk too much I thought of posting a story that my impressions may be able to serve others.

If there are questions, Do not hesitate.
See the source
Did you find this review helpful?yesno
Cookies help us improve performance, enhance user experience and deliver our services. By using our services, you agree to our use of cookies. Find out more.