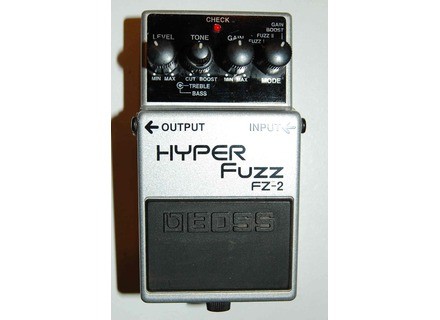 Simple as pie:
selection is sound, you go up the gain, the output level, and with double qualise potentiomtre acute low.

Well, it's the Fuzz!
This means you push the gain at least more than half if it's ugly, in fact it is one extreme of the pedals, a HYPER FUZZ in the words of the mark " the boss. " if the gain is pushed there is more sustain, the sound is difficult grate, there must be "clean fingers on the stick" to the rank of clarity. The two fuzz sounds are DIFFERENT, but SETTING THE qualo serious acute is not convincing!

As against the channel booster is trs INTERESTED to attack an overdrive setting SERIES. Whereas it inflates the guitar signal. Besides, it should be noted that even the zero-volume set in this position booster, the output level increases Whereas! Warning your ears!

Like all BOSS pedals is robust, but if you do not want to bore your listeners should be used sparingly the pedals (which is not a brand of multi-effects well known) because the sound is much too typ to return often in an album or a concert!
See the source
Did you find this review helpful?yesno
Cookies help us improve performance, enhance user experience and deliver our services. By using our services, you agree to our use of cookies. Find out more.