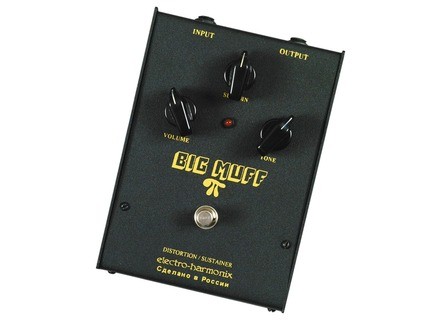 View other reviews for this product:
So in a mtal pedals, pretty rough I must say! soviet is!
It has just three buttons: volume - Sustain - tone.
There is no power supply for cons, it's a shame, because the 9-volt batteries to get to be boring and flip it just before a concert, even if we changed the batteries the week before!
I put 7 because even trs rustic with buttons a little soft and fake, I think the 50 achte plutt for her!

3 buttons, it's not complicated to use trs. One volume RULES, RULES on the intensity of saturation / fuzz we want, we Sets the Tone of his ... it's basic!
No manual, to serve what?
But a black dot: the buttons are really crappy quality, they turn on their own (well I have not tried any dvisser ressrer for either) and I had the problem in to hook together the volume knob in the Inrush PDAL, ca bin and made noise! (We're smart rebaisser fours to the volume!)
I put 7, because it's an easy pedals, but it is even con to get default on finding something so basic! (And it's bigger than a small Boss)

The sound is trashy enough, at least change the sound numrique ca. It is sending you can have sounds like screaming trs trs heavy sounds. For there forcment against a background of saturation even at the lowest, so it can not really use volume pedals. (In troubleshooting)
However, if the achte without trying, one can be surprised, because it is clear that his dpend lot of the amp used. For me, a champion in fender is bof on a spider ca II passes, and a MG100DFX, it's good. (According to my gots). So when even a try on his amp!
I put 8 because the sound is rel, type, and for that price the whole adequate, even if it's not nirvana. Really satisfactory even when I think we all can find their account.

I use it for 2 or 3 months, but I do not use it all the time. She brings something on some pieces, but it's clear that I will not base all my pedals on the Satus either.
For 50, c'tait not a big investment and we are well satisfied with the feedback, so I put 8 (7.5 plutt but because it is ugly, big and a little shit with buttons).
It applies even when the stroke of a buy it, it's profitability.
See the source
Did you find this review helpful?yesno
Cookies help us improve performance, enhance user experience and deliver our services. By using our services, you agree to our use of cookies. Find out more.