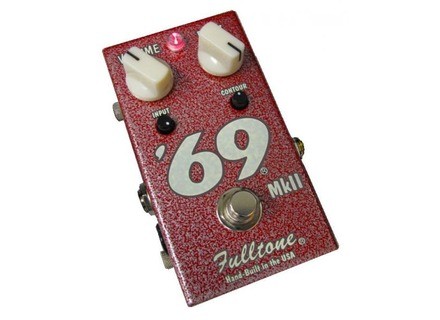 Buy this productView price information >
View other reviews for this product:
I will go ahead and say it...this is Jimi Hendrix in a box. Of course you will need a Marshall plexi reissue of something similar like a Germino Monterey and with out a doubt a Fender Strat. This thing sounds exactly as it reads on the cover of the box.....'69. It sounds exactly like something right out of the rock playbook from the late 60's and early 70's.

This is not a Big Muff thick chewy type of fuzz box. It is somewhere in between the Big Muff and a normal overdrive pedal. So you get a fuzz tone but on the thinner side and closer to a distortion box than anything. At least that is how i hear it in my ears. The is based on the germanium transistor chips.

It has four control knobs that do quite a bit of tweaking for your tone. A level, bias, contour, and fuzz control knob. A Contour Knob lets you dial in Midrange, Harmonics and Sustain, also an Input Bias knob adjusts the EQ and gives great Overdrive/Distortion sounds when its level is reduced. This pedal is basically the same tone as the previous model but a newer case is really the only noticeable difference.

This is a great fuzz pedal that is a lot of fun to play with. If you fare on the side of light overdrive style of germanium transistor fuzz pedals then you will like this unit a whole lot. If you want something straight out of Smashing Pumkins then you will need a Electro Harmonics Big Muff. The Big Muff will be a whole lot thicker and rounder. This pedal will drive your amp's front end more and add sustain and a light fuzz tone. At new these come in right at $169.
Did you find this review helpful?yesno