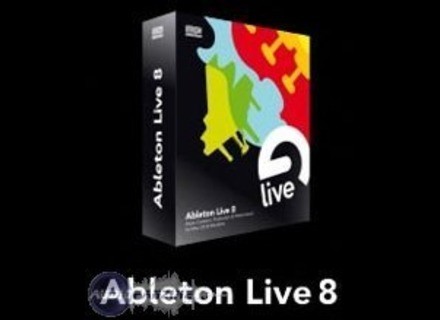 Live 8, General Sequencer from Ableton in the Live 8 series.

Ableton's Live has been with us for some time now and since it’s initial release in 2001 it has proudly sported a simple one window interface and transparent ’no frills’ operation. This simplicity initially led some producers and musicians to believe it was perhaps a step down from other more complex DAWs, but seven years down the line Live has more than stood the test of time.

Many musicians, engineers and DJs have now adopted Live as their primary production or performance environment and Ableton is now onto an impressive eighth major release. Their constant development of the application is also relentless with version 8.01 of Live being released only weeks ago, which sees stability and workflow further improved.

Live has never been short of virtual instruments, hardware quality effects and cool production tools but each major release manages to expand this sequencer's inventory, and version 8 is certainly no exception. With a brand-new virtual instrument, updates to the interface, new production tools, extra effects and even an expanded sample library, the folks at Ableton certainly aren’t running out of ideas.

How Suite it is

Live now comes in three different versions: Live LE (medium), Live (Large) and Ableton Suite (XL). Live LE is essentially a cut down version of Live for the entry level user or budget conscious beginner and is limited in some areas such as number of tracks and effects that can be used. Live and Ableton Suite are pretty much the same core application but the Suite contains a pretty large sample library (including the new Latin Percussion collection) and you will also get all ten virtual instruments that Ableton offers for the higher price tag.

Let’s take a look at the major changes and hear some audio examples of them in action to see if this new update is a step in the right direction...


Groove is in the Heart

One update that is sure to be appreciated by a huge percentage of Ableton users is version 8’s new Groove engine. This simple but effective system brings ‘drag and drop’ MPC style grooves and more to any performance in your arrangement.

This is very convenient since Live 8 ships with a an impressive library of groove patterns, that have been created exclusively for Ableton by ’some of music’s most original, expressive and soulful drummers.’ These patterns can be applied to any of your audio or midi parts by simply dragging them from the browser. If you want to take things further these grooves can even be applied to your entire project.

If you fancy the idea of building your own groove library then you're in luck, the new groove engine allows you to extract grooves from any audio or midi you might have on your drive. These new grooves can then be applied in the same way as the standard library files and of course they can be stored for use in any project.

Other nice touches here include a randomize function to introduce some truly unpredictable swing into your music and the ability to quantize both audio and midi in realtime.

Warping has always been a real standout feature in Ableton since its conception, so die hard Ableton users will be pleased to discover that version 8 includes an all new warping engine.

For those of you that are new to Ableton or not totally familiar with the process of warping, the process basically allows audio to be analyzed and manipulated so that it can play back at any tempo. The main project tempo can then be changed in real time and the warped audio will remain locked in place. Warping is generally considered a better option than traditional time stretching as it introduces less artifacts.

The warping engine in earlier versions of Live was really impressive and didn’t give users much room to complain, so the fact that Ableton have improved the system is pretty impressive in itself. The new engine offers a new method of actually processing your sounds and allows the events to be warped around the timeline rather than vice-versa. This results in a much smoother result and avoids squashing and squeezing the time line too much.

Live is now able to analyze the transients in your audio and assign handles to them. This new feature can also be used to transform the handles into midi information. By using this method you can play back each portion of your sliced loop or rearrange them using Live’s midi editor.

Both the ‘beats’ and ‘complex’ warping modes have also been given a serious upgrade, resulting in more transparent results when treating percussive material and more complex, polyphonic sounds. In use, both of these modes now sound truly excellent and can even give good results with really extreme settings.

Live 8 introduces no less than six new audio processors to its sonic arsenal, pushing the list of bundled effects to over 20 virtual devices. This is more than enough to get anyone going straight out of the box.

The new arrivals are a nice mixture of special effects processors and production workhorses. A highlight of the new, more decorative, effects is the new Vocoder plug-in. This really is multi band vocoding made easy, the routing is clear and the large center display gives a you a clear picture of what is going on with each band.

Other offerings in this area are the interesting ‘Frequency Shifter’ capable of cool ring modulation effects and the simple Overdrive plug, which compliments the other distortion processors in Live nicely.

There are also some more common plug-ins introduced that will prove to be incredibly useful in an average mixing session. A multi band dynamics compressor and a limiter join the party to tie things up in the dynamics department and should make getting that final mix right just a little bit easier.

Last but not least is the new looper plug-in. Half instrument, half effect this welcome addition is something that seems to have been missing from Ableton up until now. This handy little phrase looper is set up for one-touch remote operation so everything can be controlled via an optional foot switch. This is great for creating tape based jams and endless over dubs.

Any part of the loop you create can then be simply dragged and dropped onto a new clip slot to create an individual clip. The looper is also well hooked up when it comes to keeping things in sync and is capable of remaining in time with multiple instances of the effect.


There's not as much action in the area of virtual instruments but that doesn’t mean Ableton hasn’t done any work here. In fact there is actually a brand new instrument on the scene called ‘Collision’, a physical modeling synth capable of creating stunningly realistic mallet and percussion sounds.

Xylophones and Glockenspiels are the order of the day here but with some tweaking and experimentation brand new sounds can be coaxed out of Collision. It’s a really nice contrast to the other more synthesis based instruments in Live and should offer an interesting new set of sounds for most users. Here are a couple of audio examples: Bells 1, Bells 2, and a Pad.

Live’s classic instrument Operator has had a serious overhaul for version 8, and on the surface this can appear as simply modulation, routing and interface adjustments. But there is actually a lot more to the upgrade than meets the eye and in use it becomes apparent that Ableton has really put in some time here.

At the heart of the new Operator there are new ‘user’ waveforms, the synth now allows you to edit your own waveforms by drawing in the amplitude of different sections, resulting in truly custom oscillators. Feedback based oscillators are also available for more extreme sounds.

Operator now also sports brand new filter types and the ability to edit the curves of envelopes and filter curves in a similar way to the system in their ’Sampler’ instrument. A new midi mod matrix has also been added allowing the user much more flexibility when routing modulators.

A lot of the really important updates in Live 8 are in the GUI and workflow areas. There are literally too many new features to list here but one of the standout contenders is the ability to create crossfades in the arrangement view, this is a great way to execute non destructive edits and achieve smooth transitions.

The MIDI editor has some new features including step editing, an insert marker and other editing procedures have been enhanced. This was certainly something that needed a tweak, so another welcome update.

If you run projects with large amounts of tracks or find yourself assigning multiple parameters to a controller and trying to tweak more than one at once, you are in luck. Both these issues have been addressed in Live 8. You can easily group tracks in clip view, allowing you to treat large groups of sounds as if they were one. They can be triggered at once and also mixed as their own bus.

As previously mentioned, there are numerous tweaks of this nature and are too many to run through here but they are all useful and add up to an exciting release.

This is a really major release for Live and although the application remains the same at first glance the changes could literally change the way you use it. What could be a new set of toys to the seasoned user, could potentially be the feature that convinces the new user to switch.

Installation is a breeze and can be completed by download without the need for any dongles or iLoks. Activation is an automatic process that takes a matter of minutes so you’ll be up and running in no time. So if you haven’t checked it out already then do yourself a favour and upgrade or a least test drive the demo.