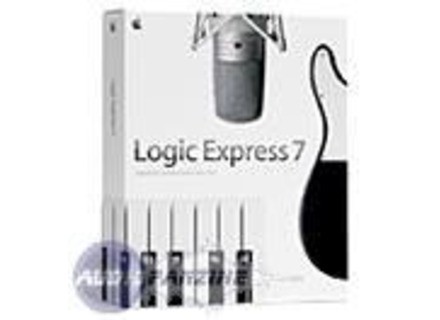 Logic Express 7, General Sequencer from Apple in the Logic series.

View other reviews for this product:
Apple Logic Express 7 is a program that you can do almost everything in. I don’t think you can still purchase it though because they have upgraded versions now. Logic Express 7 is not really the full version of Logic also known as the pro versions of logic. There are some big differences in the Express and Pro versions and mainly it’s the plug in instruments. Also, maybe a few effects from the mixer as well. Apple Logic Express 7 belongs in more of a classroom type setting if you ask me. It just seems as if they watered down the pro version. So maybe for people who cant afford to get the Pro version would get Express 7 but I just don’t think it’s a good idea.

As with all of Logics software it will run great on your mac, remember its mac only! I do wish Logic would come out with a windows based version. I think they could make a lot of money if they did because there are a lot of pc users that would love to try Logic.

Overall, its great but if you can afford to get the pro version get it. Don’t get the Express 7 because you will just need to upgrade to pro anyways at some point or another. So you mine as well just save up and get the pro version and save your self from the headach. Unless you get the Logic Express 7 and have the money to get some good plug ins. But if you have the money for some good plug ins you mine as well just upgrade to pro and be ready to go right off the bat and skip Express. But all in all Express 7 is a good software but I recommend going with the Pro version, you wont regret it.