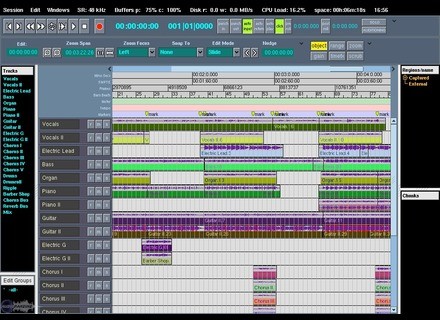 View other reviews for this product:
The installation is automatic on Linux and MacOS, if you have the right package (which isn't necessarily the case for all Linux distributions nor all Ardour versions). If there's no package, you need to type in the commands in the terminal to compile the software.

The learning curve isn't steep if you already know similar tools and you have basic notions of how Jack works. Otherwise it can be hard to find the right check box to activate the different sync modes with the external world, among other things. I must admit that the interface of version 0.9x is pretty plain. With a bit of luck that may change for the upcoming version 2, I'll have to wait and see.

The documentation is a wiki, which isn't as accessible as a printed manual, in my opinion. However, it isn't really necessary for basic usage, although it will come in handy when you want to do more complicated stuff.

I record and, mainly, mix on an "average" PC (Athlon 1800+, 1.5 Gb RAM, M-Audio Delta 44 soundcard, under CentOS 4). But I also record on a Powerbook G4 alu with an Edirol UA-5 USB interface running MacOS 10.4. It works relatively fine on both systems. On the PC I've had some painful crashes using certain LADSPA plug-ins, but it's gotten better after version 0.9beta30 and 0.99. It really blew me away on the Mac. I've only used it once, for a live recording in desperation, because neither Garage Band, nor Logic Express, nor Digital Performer worked correctly. I recorded two hours of concert without a single issue.

In terms of performance, I have never had an issue with Ardour itself (I've never mixed huge projects, 12-15 tracks at most). However, certain LADSPA plug-ins take ages to process things (the TAP Reverberator is horrible in this regard). It struggled when my PC had only 512 Mb of RAM, but I went to 1.5 Gb at the same time a new Ardoour version came out, fixing a lot of bugs (from 0.9beta29 to a development version close to beta30). I don't know if the problem was solved due to the additional memory or the new Ardour version, although probably both played their part.

I've been using it for 4-5 months. It's the only serious environment to work with audio under Linux. Rosegarden and MusE are far from reaching this level. I wouldn't be able to tell whether it's better or not than its counterparts on other platforms, I guess that's a matter of habit (I have never understood how you can use Logic without going crazy). It only lacks MIDI support (which is foreseen for versions 3.x or 4.x) to be perfect. And I suppose that the new interface that's being currently developed will address the problems with the present version.
Did you find this review helpful?yesno
Cookies help us improve performance, enhance user experience and deliver our services. By using our services, you agree to our use of cookies. Find out more.