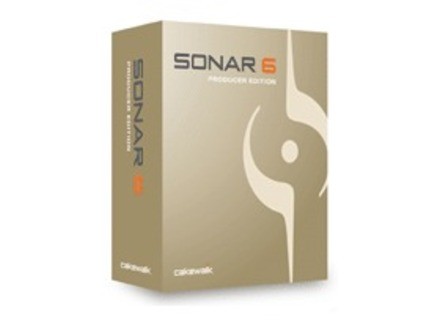 View other reviews for this product:
Problem-free installation at home.
No incompatibility particulire report, set by the Audio Ease Altiverb of ( ) Gnrant many crashes in my random image.
Setup could not be more simple.
The manual is exemplary.

The software works as well as others, the most unstable I've ever given t test on this platform (random image crashes at launch or loading the project) as Nuendo 3.2 and ProTools LE 7.1.
Impressive performance. I have not been able to saturate the (s) Processor (s).
A few crashes as others, mainly with some VSTI (Sonar closes without further ado).

I'm using Sonar since trs long, but I used other programs together. I dropped the little bit more. Must prciser the V6 is a rvolution on many points, which saw many users migrate to other dairies it. Knowing several software trs well, when I do a dmonstration features included in the basic software (Producer Edition) and I show how it's done the same thing in other software, unwittingly I am migrating many users! (Maybe I should be asking a percentage Twelve Tone Systems?

I think that beginners in computer music, without a priori, but regular at the user PC, Sonar find more intuitive than many other programs. In addition, Sonar gre best audio and fawn so much more ergonomic (modern PC Mice multiple buttons and tilt wheel). Also, no need to be a specialist in consoles to routing in Sonar, so it's childish and clarity without gal.

What I like most about Sonar? The list is too long ... sincrement Version 6 includes an impressive list of tools I could do without, and require the purchase of additional components (plugins) with other apps, which is quickly trs expensive. Besides the simplicity of the interface, not requiring to use the manual each time to find a function, when you're a newcomer. The translation of the French version use appropriate language and speaking trs. In addition, the policy of Twelve Tone Systems I like, unless they follow the trend marketing compared to the past: To believe Steinberg, Digidesign and Apple Logic, they are all leaders (see page of the product on their site internet, lol!), however, there can be only one leader, then who is lying?

What I like least? The management of the South, but it is valid for all others. Sonar 6 is doing even not too bad. The "Cubasification" which s'opre, especially when you look at the console of Sonar 6, largely inspired by Cubase SX. I find this new console too much load.

I have tested and used: Cubase (From Pro 24!), Cubase SX (1 4 Beta), 3 Nuendo, Tracktion 2, Samplitude (beginners since its Amiga!) Until the v8, ProTools (LE & TDM, since v 5.8), DP 4, Logic Pro 6. Everything on Mac & PC. None are good or bad my opinion, all have their strengths and weaknesses, and the fawn apprhender schmilblick. Sonar on a PC is for me the winner and overall terrain. It's been (almost) everything you rve for less and with an audio quality that has nothing to envy others. What more?

I no longer use the Sonar (Prod) & Live 6 (Live). Both exported to know Manir fast copy, which is not the case for most others. (Export for Protools, Cubase or Logic is a nightmare, it must be done track by track, they do not know a single opration export an entire project in the form of multiple audio tracks to all beginners and paramtrables point 0).

This choice is carefully and extensively rflechi, supported by the growing success of Sonar and the potential dclin the Mac. Figures released by Apple and its trade policy of leaving nothing prsager good when the future of this platform, which becomes infinitely minority (# https://fr.wikipedia.org/wiki/Apple_Computer Parts_de_march.C3 . A9) from the PC, while becoming a little bit of a mid-range PC.

In conclusion: Sonar is a good software, but its ergonomics are trs print from the Windows world (available menus, context menus, shortcuts, drag / drop everywhere, excellent management evolve mouse). It does not suit me a MacOS indemordable of ergonomics, more simplistic.
See the source
Did you find this review helpful?yesno
Cookies help us improve performance, enhance user experience and deliver our services. By using our services, you agree to our use of cookies. Find out more.