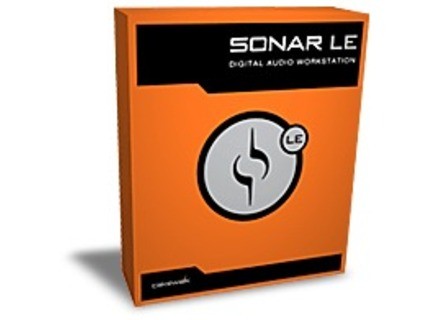 Sonar Le, General Sequencer from Cakewalk in the Sonar series.

View other reviews for this product:
see global opinion

I give notice lice quickly meet the demand of a AFien.
For starters, I use it for about 7 years, I do not know if the version has been updated in the meantime, then, my opinion is worth what it is ...
Overall, I use to make songs track by track. I record the audio (guitar, bass, vocals ,....), noon and plugins instruments controlled from a keyboard, and import audio loops and drum.
I do not remember having problems with installation. I found really computer music with that, so I put a little time to understand, which would be the case with any DAW. Some crashes very occasionally, but I do not know if it does not come rather Waindauze Plug'ins ... To load VST, it must first be recognized by software Schedule provided only negative, but not insurmountable .
I had the opportunity to try and LIVE THE CUBASE LE, in the same category. The highlight of SONAR LE with respect to the latter in my opinion is much less restrictive limitations on SONAR. I can even say that I was never blocked by any limitation whatsoever, to use that I have. So much so that I always use 7 years later. It is true that I am not a home-studio owners confirmed, but for a musician wanting to register, models, call is enough. With its very low binding limitations, I am familiar with Sonar, which has the effect that if I had to look further a sequencer is to another version of SONAR that I would turn.
See the source
Did you find this review helpful?yesno
Cookies help us improve performance, enhance user experience and deliver our services. By using our services, you agree to our use of cookies. Find out more.