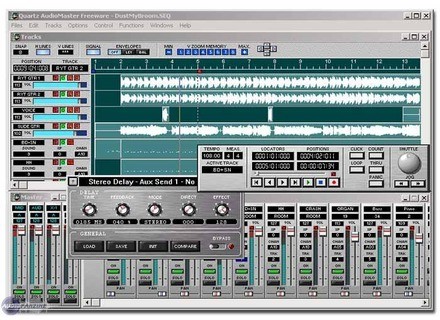 View other reviews for this product:
The install is no pb but c'st not compatible with all cards, with incompatibiit creamware/win2k for some config, there is support intgre is not too bad, but some functions such as piano caches are really roll, hard to accder, whereas it is the main software intrt.

My config: MSI k7t266pro (via) / athlon 1.2/384ddr/dd40Go/creamware powersampler
the software does not work on win2k, probably wrong on winxp perfectly under Win98SE (stable). it is the fact trs satsifaisants converters and internal effects of my card without the card remains trs summary with 4 effects.

I use it occasionally, for 6 months, to test the pro version of QAM on some OS and also to develop a free software LSIT performance.
The big plus is the free well sr, with the possibility to save the deuxime big plus is the piano-roll, but I love this summary Systm, even when it is well below the piano-roll of fruity loops.
I have tried many squenceurs QAMfreeware before that the top is the absolute beginners when we do not know anything, it is much simpler than cubase, it is basically as simple as cakewalk pro (the former sonar)
the question of choice does not arise, it's free! it is a mistake not to try it, except for those who are doing dj pro audio ...
See the source
Did you find this review helpful?yesno
Cookies help us improve performance, enhance user experience and deliver our services. By using our services, you agree to our use of cookies. Find out more.