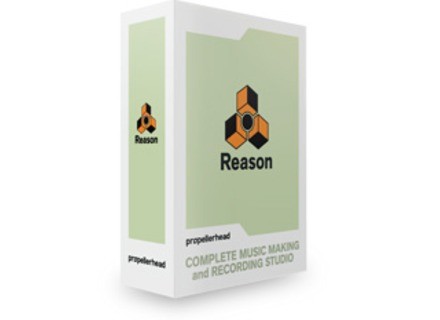 Reason 6, General Sequencer from Reason Studios in the Reason series.

View other reviews for this product:
Propellerhead Reason 6 is the newest version that they have come out with this year, they are already on version 6.5 though due to some issues with some drivers they were having shortly after the release of version 6. You can use Reason 6 on your Mac or PC and it will work great on both as long as you have enough CPU and RAM to run it efficiently. If you have a PC you can run it on Vista, Windows 7 or XP. It will run great on any of those systems but be careful because if you have Vista or Windows 7 you will need to have the 64 bit systems and not the 32 bit systems or you will run into some major problems.

Mac users just need to have a newer version of the OS X, I think they need to have 10.5 or later in order to run Reason 6. Right out of the box reason has some very good plug ins and effects that you can use right away without having to purchase other plug ins. One of the reasons that I feel in love with this software is that you can record an unlimited amount of tracks right into it and if you computer can handle it the possibilities are endless. Some of my sessions are pretty big with a lot of live instruments and tons of vocals so this is very handy for my set up.

Setting up Reason 6 was simple, as long as your system meets the requirements you will be using it in no time. This is where Reason has had issues in the past with drivers on certain systems. They have to do updates because a lot of users are having problems, though I have no experienced any myself. I am very happy with this software, I have been using this version of Reason since early spring.
Did you find this review helpful?yesno
Cookies help us improve performance, enhance user experience and deliver our services. By using our services, you agree to our use of cookies. Find out more.