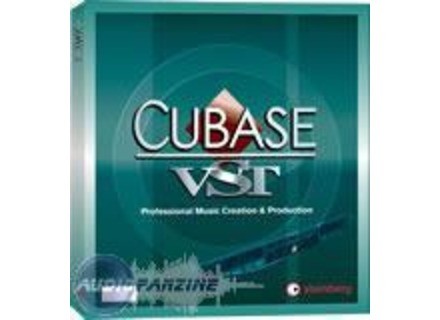 
8 user reviews
Find it in the classifieds starting at $5 Avg used price: $5

View other reviews for this product:
Easy installation, all is well Droulez Cubase custom settings changes you. Few things are requests, except the n SERIES and the destination directory (and if you want to install Mp3 Encoder).

The manual is in English, quite large, a little obvious for beginners French.

My computer is trs viel AMD K6 II 400Mhz 256 MB of memory, the card is the beautiful Tascam US-428.
Surprise, it works better than Cubasis Vst US-428 (which often lost sync) here even though the app is heavier, the slightest problem.
Only enui is that falait disable Telc.Activ. (I am a pianist and often plays note C6).
I expected a disaster, because with the version Allgemeine, has had trouble. But it's magic, the soft heavier works better than the allg.
Stability issue all goes well, Windows 98 is happy.

I use deuis few weeks and I did not like Cubase (Logic of j'tais before, but you know some history) but it was the only soft Fully grate the Tascam. I changed my mind, if the version 3.XX were bof (mixing twelve o'clock doubtful unstable ...) Cubase VST 5 is gnial (I think better than SX and XL, they do not give access s to MIDI tracks from the Tascam).
I think the gulf between a crazy Cubasis and Cubase first.
I tried to beginners Cubase VST 3.? with a friend, I did not, I found a very heavy and unstable, after I gained 7 CakeWalk, I found a well before discovering Logic Audio (for me the best, but not for PC ) and I am back but this time on Cubase enchant.
The report quality price (same for 500 Vst) is very good for me because trs function are evolved. I would not say more evil of Cubase, I promise!

So much for those who knew Cubase 3.xx and have the does, try it over the same 5 and SX is really screwed up (but not Windows 2000/XP and control tracks twelve o'clock from the US-428).

I wanted to buy but the steering SL MIDI tracks n'tait implementations and not when I tried Cubase 5 I thought "This is a thing", so I looked on occasions.

So if you have an old machine or a Tascam US-428, you see in your journal "For Sale Cubase 5" go to my guy.

PS The dongle is parallel range of port, a port that has tendency disappear.
See the source
Did you find this review helpful?yesno
Cookies help us improve performance, enhance user experience and deliver our services. By using our services, you agree to our use of cookies. Find out more.