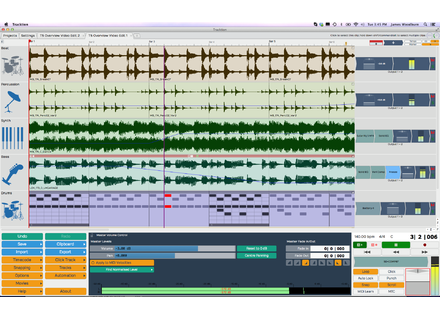 Tracktion 6 on Linux and v4 is now free

Along with the release of version 6, which has recently been expanded to Linux, the Tracktion team is now offering the v4 for free.

Tracktion 6 was until now available as a beta, the final version has just been released a few weeks after the Mac and Windows editions. The Linux version of the DAW is available for $60 and you can download a trial version from www.tracktion.com.

The developers also launched Tracktion 6+, a bundle featuring the DAW, the Master Mix stereo multiband processor plug-in and the Micro Synth Pack virtual instruments. This edition retails for $100 and is also available for Linux. If you already own Tracktion 6, you can download the processor plug-in and virtual instruments separately at the Marketplace, where they are sold for $59.99 and $39.99 respectively.

Last, but not least, Tracktion 4, which marked the return of founder Julian Storer at the head of the Tracktion development team and company back in 2013, is now available for free. This fully operational DAW, with plug-in support and unlimited sessions, is a perfect DAW for beginners who only need to register at www.tracktion.com to download it for Mac, Windows and Linux.