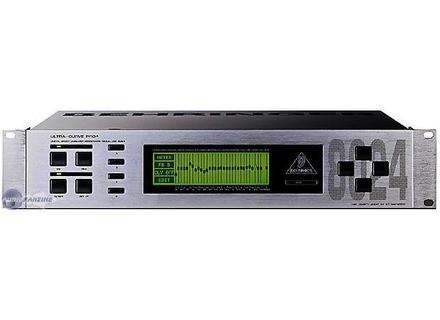 View other reviews for this product:
I treated myself to a DSP 8024 for a birthday suite has a full article in New magazine and as a result of his has an article on it appeared configs characters or home cinema in a config.
I chose it because it had a 5 canvases in the test with only compliments NRDS super funky ....

For technical details, (I no longer believe all fawns ...) see details on the website and other internet. I no longer believe in the% S / N dB, and copper cables VNUS we do the bugles. I prefer tubes and power supplies as big as my fist.

The brushed aluminum facade is of good quality solid and well finished. The selection buttons are too. rack type 19 format. "

The manual, for me, trs trs is not intuitive for those who know nothing, and requires a minimum ability to understand and rglages.

I do not have sound, so for me the functions anti feedback ... I do not use.

Using silent for use HIFI.
FYI, I use a pre amp Denon 1801 (bought a little too fast ...), amplifiers ROTEL RB1070 (to compensate for the lack of the denon PCHE) and 2 Jamo D830 (very glad also for the volume ratio bandwidth), on foot aluminum ballast of sand dune pila

Originally I bought it to compensate for a low default too strong, typical bump due positioning in the corner of one of two speakers and the walls too prs (the D830 have the event on the rear). Of course, I could find another position by transferring the table eat the sofa and my girlfriend flowers, but until proven otherwise, we all live between four walls and we do not put the speakers in the open middle of the room ... So I bought an equalizer and I provide continuous live in my living room.

How it works self calibration? Easy.

Connect the microphone. Switch on the auto Q DSP. Position the microphone in the center of the cost. Launch the application. (DO NOT FORGET TO GIVE ALL THE CENTRE BEFORE pots otherwise the new sum correction with the old ...) then the test begins (silence, we no longer talk!) First, a speaker, then the other. After a few seconds, the correction curve appears. I understand that the DSP is a kind of average of the values ​​it collects.

Good so far, so good. it puts a?? "Do not forget to put all the other pots .... then ...... appears" eh? how was it not the same correction curve?? it has reremet!! "... Seems not." Well, no, no way to have exactly 3 curves scabs. Well, they are similar in the midrange and treble but n&#39;esprez not have a super rponse prcise in the grave. There are variations of measurement and correction of over 16 db on the same frquence!! can not you tell me. But in fact this is explained. If the bumps and hollows are too large, you have two problem.

2 - The sudden changes are due to put in resonance of the pice and cancellations frequency drives in opposite phases. A position of some micro diffrent and you your in a hollow or a bump. But the poor, there is little nothing.

So having several measures APRS several places you can get a curve, average of the mean.

To beginners, I branch between the pre amp and the amp. Normal, I think it&#39;s the most empty.

Immediately, I tilt. there is a blast. not a small one ....
Objectively, this means the very low passages (and there is no need to test the CD to realize). Take a GOOD cd classsique with trs good recording. In a passage low, the breath takes over (and once you have it, you make a fixation)

So I tinker, test, change .... and I think I found the compromise solution (for what that manure salesman did not want me to take o 2 / 3 of its price APRS test only 2 weeks!)

I branch between CD and pre amp. => Attnu breath is because you have a low volume on the preamp and you does not amplify the blast.

Then I connected to the loop CONTRL (monitoring) of the preamp. The again, the breath is very attnu still does not amplify as you breath. And I let as a. .. Because I can turn it on or not the remote control.

However, there is always a problem that remains. Changes in corrections are not to be brutal. It takes small diffrence between each pots. There sometimes a kind of saturation effect that appears on some notes very dynamic recordings. The example that kills. The prludes OP 23 by Rachmaninov Erato Lugansky (I do not ad jur. The record is very "numrique" (long live vinyl!) And sometimes on high notes (Rachmaninov, right same), I feel that the speakers spit and saturate. I cut the DSP - this disparrait-...
To conclude with a positive note even when. Since I n&#39;coute not only the classic, the DSP is nice to use boom boom! sometimes I make a delirium with a good reggae and the other, breath, I do not care just because you hear it. Sounds good with a good deal in the Medium and low as I like. So for the sound system in a loop monitoring, must see .... I must say that I use the DSP depending on what j&#39;coute. Vinyl Classic = NO. In conventional CD (Save digital or analog) = NO, jazz, = a little, it dpend. In reggae rock pop and other genres that dfoulent = YES. In gnral I put it with a little delay for spacialisation this.

Note that a DSP does not like the youth radio ... notament NneRJ the Sky and a stick that I do not know what&#39;s surround, super stereo, generator LFE ... for correction in the lower additions of DSP + LFE = super serious too foullit.

My opinion is very clear and not clear at once. I would stick a 4 / 20 on the face BUT THE 8024 IS NOT A DSP APPARATUS FOR HIFI! It finally just be my mistake.

As discussed above, in stereo, Niet, in sound system, disco ... I do not know but I think it can boost circulation and lead a night. Far be it from me to criticize ide PA. APRS all the amps tubes are used by guitarists as audiophiles ... So respect.

To note, I e-mailed incendiary NRDS (the famous JH) to ask if avaut tumors and the ear, or he could release this (I do not quote) "quiet operation" "transparency" "drop in signal to noise" ... and did not approve of his Conlusion AT ALL. He did not rpondu. Since I no longer buy the NRDS.
See the source
Did you find this review helpful?yesno
Cookies help us improve performance, enhance user experience and deliver our services. By using our services, you agree to our use of cookies. Find out more.