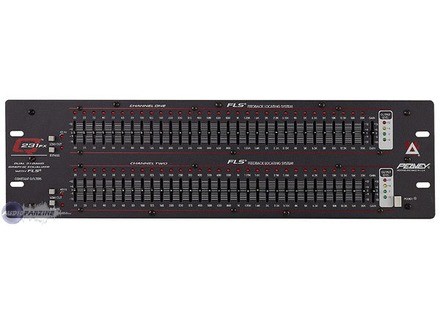 The Peavey Q231 FX is a stereo graphic equalizer, with each band consisting of 31 bands. It is an analog piece of equipment and it can be used either in the studio or for live shows. I've only used the Q231 FX in the studio, so this review will be focused on this application of the equalizer. A major feature of the equalizer i the FLS, which stands for Feedback Locating System. It allows for quick and easy filtering of noise and feedback. It's got 1/4" TRS connections for both channels and for both inputs and outputs. It is rack mountable in a traditional rack casing.

Using the Peavey Q231 FX is just about as simple as it gets in terms of using a graphic equalizer. Simply move the sliders up or down for cutting or boosting at the specified frequency. The frequencies on the 31 bands range from 20 Hz to 20 kHz, and overall they are chosen wisely. In addition to the 31 bands on each channel, the Q231 FX also has buttons for a low cut at 40 Hz and bypass. There is also a gain slider for setting your overall output, which ranges from -15 db to +15 db. It also has metering for the overall output level. A manual isn't something that is necessary for this unit.

The Peavey Q231 FX won't add any sounds of it's own, and will simply do what it is told to. It is great for notching out the specific frequencies found, and since there are 31 bands you can almost always find the frequency you're looking for. The Peavey Q231 FX can be used across the board, as I can't necessarily say that it sounds better for one application over another. It is best for filtering out noise and feedback, but also will do a great job with notching. I usually prefer using a parametric EQ for versatility purposes, but when you've got 31 bands, I really can't complain.

I've used a good amount of different outboard graphic equalizers before, and I really can't think of too many that are all that much better than the Peavey Q231 FX. I can definitely think of a ton of other parametric EQs that I'd rather use, but when it comes to graphic EQs it seems that the Peavey Q231 FX is as versatile as any that I've used. The FLS is a great feature which really just puts it over the top. The price of one of these new isn't too expensive, and since they have been making them for a little while I would imagine that you can get one used for a good amount cheaper. If you need a hardware graphic EQ, the Peavey Q231 FX will do the job very well at a reasonable price.
Did you find this review helpful?yesno
Cookies help us improve performance, enhance user experience and deliver our services. By using our services, you agree to our use of cookies. Find out more.