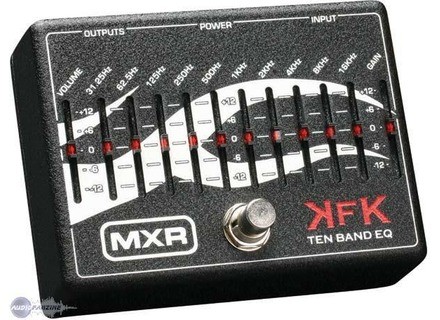 « Basically the same as the normal one »
4

Buy this productView price information >
View other reviews for this product:
Kerry King is fairly well known for boosting his amps with an EQ. He generally uses a "frown" pattern to really help push the front end of the JCM800s he plays. Because he used one of these for years, MXR decided to finally give him his own signature pedal, right around when he got his signature Marshall. However, it's pretty much the same as the normal 10 band EQ that MXR has offered for years. The main difference is that this can be run into two amps since Kerry King likes to run multiple Marshalls.

The housing is a sturdy metal housing that has this crinkle/wrinkle black finish. Each individual band has its own LED, so you can tell where everything is just by looking at it. One pain is that you really need an adaptor with this thing, and it's one of those 18v adapters, so you can't easily power it with conventional power supplies. The sliders move nicely, and it's fairly low noise. The manual gives you some nice example settings that you can mess with, but I generally just go with some sort of midrange boost, unless I'm using this in the loop.

The pedal is fairly noise free, which is a huge plus. The Boss pedals generally are somewhat noisy, and it can be a real tone sucker. This doesn't seem to suck any tone, and it's super easy to use. There are two main places you can use this pedal: in front or in the loop. If you use it in front, you'll be using it like a gain pedal. You can boost your input to help give you more "power" from your pickups. It's very much like a tubescreamer this way. When you put it in the loop, you can shape how the actual amp sounds. It's like having a separate EQ to help dial in the exact sound you hear in your head. This is super helpful, but you need to have a serial loop or 100% mix going on for this to work properly.

The pedal is solid, but I don't think it's worth spending the extra money on unless you absolutely need the extra outputs to drive more than one amp with this thing. That's the main reason to buy this pedal. If you only run a single amp, just look into getting the normal one, or maybe even look into the Build Your Own Clone 10 band EQ. That's actually my favorite EQ on the market.
Did you find this review helpful?yesno