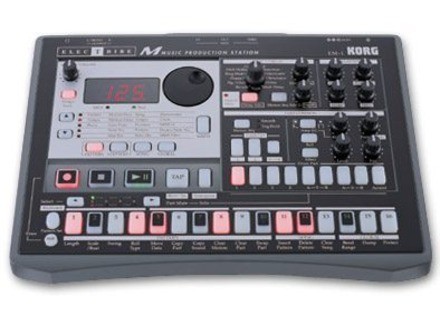 ElecTribe Em-1, Groove Machine from Korg in the ElecTribe series.

View other reviews for this product:
If you are a newbie to the world of music production, this product will suit you great. It's only just come out on the market and the price no doubt will drop soon. It has loads of memory storage but the main limit on this product is that it can only cope with 4 bars per memory store where as most trance producers work with 8 bars of music in each pattern. It also only features 2 synths, but for the size that it is it's pretty impressive.

I've rated the usability quite high as if this product was being used live in a club, the ability to swap from one pattern to another is great. Changing the sounds and knocking in and out parts live works a treat. The interface is very flashy with all the soft rubber 'press' buttons lighting up. The unit is very easy to hook up to midi aswell.

I managed to blow the power supply that ships with the em-1 on the first day i got it, due to the power supply 'supplying' not enough current for what the em-1 needs. This was due to me having the em-1 switched on when i plugged my power supply in, although the unit should be able to deal with that without a problem anyway. If you're going to take this unit out to a club i'd suggest getting a padded bag for it, although my unit has survived quite a few drops on the floor so far.

The sound on the korg is slightly limited, it has 50 synth-waveforms, which sound very similar to one another which was quite disappointing, these sounds though can be altered using the effects and other sound controls. The biggest problem is that the sound is only capable of playing one note at a time, making chords an imposibility unless using the 2 synths at the same time, but still only having 2 notes at a time. The sound waves on the em-1 sound very digital and there is nothing near a string like noise.

I wouldn't suggest this unit if you're building on a pro studio, or if you've been in the production side for a long time. I was disappointed by the limit on the variety of sounds. I want to produce more trance than anything else, korg were meant to make this product in mind of producing a variety of styles although i think it concentrates on a lot of drum and bass. I'd definately advise it as a first unit. The korg travels everywhere with me though as it is so light.

Originally posted on FutureProducers.com
Posted by: Unknown ( 4-, 2002)
Did you find this review helpful?yesno
Cookies help us improve performance, enhance user experience and deliver our services. By using our services, you agree to our use of cookies. Find out more.