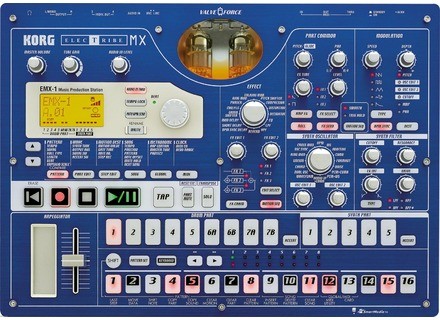 ElecTribe EMX1, Groove Machine from Korg in the ElecTribe series.

View other reviews for this product:
See below ...

Sequencer a little short, but we believe that most contemporary éléctrocompositeurs were too lazy to program beyond measures 8 ...

After a year with my beast .... I would not trade for anything in MONDE.Idéal or more for live performance, ergonomics foolproof, that makes me spend hours tinkering with my patterns and sounds . As for the arpeggiator, and well ... just for him I crack.
In short, everything to the touch, flexible and intuitive ... not to feel bullied, if not ultimately by the relatively small number of sounds ...
Not seen better for the price, I feel we will grow old together ...

PCM sounds a little ridiculous (but usable with a little humor and lots of delay); waveforms malleable and powerful (beautiful unison, Sin not far from the ultimate sub ..). Sounds bass drum vibrating and I assure you that with a little sound, one begins to quickly jeu.Snare Drums somewhat less successful, but it plays when meme.Les internal effects are cepandant a little "cheap" overall (reverb ...). forget we still under the fingers of a machine that runs the old school to tek sounds much less heard.
In my opinion, the lights, it's not just about dressing, bommage the outputs 3 and 4 to escape ...

In the end, a beautiful réussite.Pour me, it is the center of my config, backed by a sampler and a synth a bit more advanced, it was there under your fingers a powerful potential ....

I'll have a second if I had more hands.
See the source
Did you find this review helpful?yesno
Cookies help us improve performance, enhance user experience and deliver our services. By using our services, you agree to our use of cookies. Find out more.