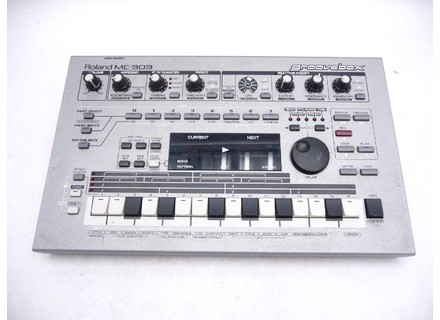 MC-303, Groove Machine from Roland in the MC series.

View other reviews for this product:
I paid alot because I bought it back when it first came out. Now I see it on ebay for a little over $100 and I might buy another one. It does it all, it just doesnt have the clarity of the big boys. The arpeggiator rules. So easy and alot of different presets. Great for snare fills in trance or fast moving hi-hats in hip-hop.

This is a true story. It was like 1996 and I went to a house party years ago and there was this dude that had cerebal palsey tearin sh*t up with this machine. He just had it plugged into a dj mixer then into an amp and like 5 house speakers. He tore the shit up for like 3 hours straight. I never even heard of the machine at the time. About a month later I got mine. Read the quick start and you are a producer. Everything is easy.

Sound quality is just okay. Great for dance genres but hell, nowadays they are pullin dance synths into hip-hop. The lead synths just arent good enough to make a professional trance/house track alone. But the basses are primo and I miss having them. Since the sounds arent huge on polyphony, the ones that purposely sound rough, are awesome.

I want another one for a couple sounds you cant get anywhere else. I miss its appreggiator and basses. Imma get another one. I shouldna sold mine. My advice to everybody. If you can....NEVER SELL YOUR EQUIPMENT!!!!. Youll miss it later and it makes for a bigger versatile studio.

Originally posted on FutureProducers.com
Posted by: Unknown (January 2-, 2003)
Did you find this review helpful?yesno