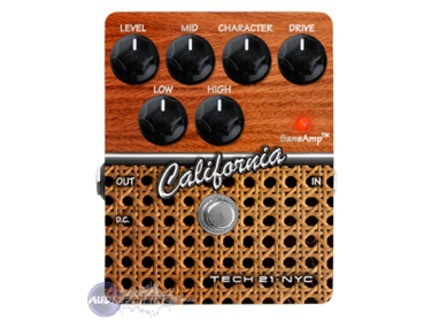 View other reviews for this product:
The metal box is nice, (it is reminiscent of old boxes of candy or chocolate or sugar)
Pedal, which simulates some amp models MESA-BOOGIE.
HP 12 simulator built in.
1 input and output Jack 1 / 4 "
1 x 9V DC to power (ability to feed via a 9V battery)
6 plastic knobs (Level, Mid, Character, Drive, Low, High) extremely sensitive and effective.
Metal case that looks solid
On / off button pleasant

"In appearance" is a classic distortion pedal, with its many Bonton and light on / off, except it has a look of facade amp with wood top, the white border and beige canvas type vintage amp, it's funny.
The manual is quite complete and is all in English. It may repel the anglophobes and neophytes, with all its technical terms but the pedal is very easy to use and insert examples of settings will give you a tiny glimpse of what this pedal can do ...
For my part, I got a good sound pretty quickly because I had already a clear idea and the purchase was not done randomly.
However, there may be a bit disappointed or surprised at first but we have to tweak the knobs in all directions and all try to better grasp and use it better. It is preferable to simply follow the examples of manual ...
The sound quality of this pedal is undeniable.

The sounds are particularly effective and reliable. By the Character and cons with high gain, the sound becomes very mushy. The knobs are very, very, very sensitive and we need to know (it even says in the manual) to lessen the treble too present, do not necessarily lower highs. As with all pre amps there ...
For simplicity, we put less of character, more sounds are crisp, clacking. More lifts his character, the sounds are more aggressive but have this annoying tendency to become mushy, but it is probably more or less up for it by playing with the low, mid, and high drive.

I use since April 2010 and I am very satisfied.
I wanted a sound very typical American, with harmonics and the grain so special that goes well with my guitar. Lacking the means to acquire a double or triple Mesa Rectifier and knowing that we are sometimes disappointed to eventually do not have the sound we waited, I pulled over this simulator and I do not regret it.
Used with a Fender Stratocaster Tom Delonge and a Hot Rod Deluxe limited edition customized, I have the sound I needed even if it seems unlikely at first.
In short, a great pedal that needs to be tamed and that is what it's worth.
See the source
Did you find this review helpful?yesno
Cookies help us improve performance, enhance user experience and deliver our services. By using our services, you agree to our use of cookies. Find out more.