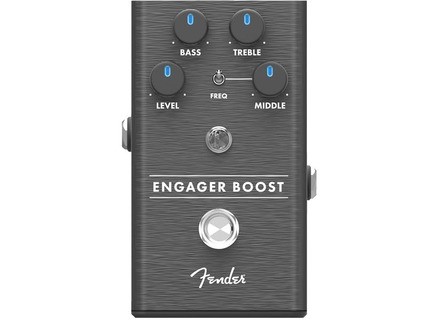 Value For Money : Excellent Audience: Anyone
Buy this productView price information >
SOUND:
Extremely quiet for a boost pedal, Fender’s Engager Boost produces very little ‘ssshhh’ noise unless it is turned up all the way (which makes it very loud and on the verge of clipping your signal) or if turned up too much with a distortion pedal that already produces a bit of background noise.

With a potential for a 20dB boost of 95% clean output (producing a bit of dirt to the original signal, but nothing too excessive), you have to listen carefully to hear the difference in tone when adding the Engager Boost, and any slight coloration is more noticeable with a clean signal rather than a distorted or driven signal. What I like is that an increase or decrease in any of the EQs remains consistent in quality with the original tone, only varying in quantity of the frequencies in question. To explain, when Bass or Treble is at 12-noon you get a flat bass/treble signal – no increase or decrease in response. By turning the knob counter-clockwise you get a Bass/Treble Cut (up to -12dB), whereas turning it clockwise produces a Bass/Treble Boost (up to +12dB). The Cut or Boost you hear is very much reflective of the tone already in place – it doesn’t add a muddy or punchy bass unless the signal already is muddy or punchy. The Midrange offers a Cut or Boost based on two frequency ranges (400Hz and 800Hz). And so, although 400Hz is lower pitched, the overall mids of the tone only sounds lower if that frequency is boosted, but higher if it is cut (since you’re taking away some midrange and allowing the Treble to break through a bit more); this means getting more ‘highs’ or more ‘lows’ based on which frequency you select (via a toggle switch) for the Midrange.
The Engager Boost implements a super easy EQ configuration to achieve both custom tone sculpting and to cut or boost specific signals (Bass, Treble or Mids). However, what you need to be aware of is the coordination of the Level control with any of the EQ cutting or boosting. If you decide to cut some bass and mids, for example, then either the pedals Level or your amp’s level will need to increase to maintain parity or to increase the overall signal somewhat. Likewise, I find if you boost one or more of the EQs, then often the Level signal can be turned right down as the ‘boosting’ is occurring via the EQ as opposed to the basic Level knob itself. In sum, there’s a lot of cut and boost potential with the Engager Boost, and all with extremely quiet operation.

OVERALL IMPRESSION:
The Engager Boost is part of a second pedal offering by Fender, and I found their initial four pedals all impressive (and very affordable). This is the first Fender pedal I have reviewed and was fortunate enough to have it gifted by Fender (after I contacted them and told them how much I liked the other pedals, which I tried out, but did not review). For $89.99 USD (e.g., from Sweetwater) you get a lot of pedal, including quality construction, LEDs on the controls (that you can turn off if preferred), a red LED on the battery door when the battery needs changing, a quality and bright jeweled LED ‘on’ light, a built-in buffer (that you can turn off and go true bypass), and a front flip-door for easy battery change (particularly if you tape or affix your pedal on a pedal board). More than a boost, the Engager Boost is very much a tone sculptor that allows you to cut or boost different frequencies while boosting the overall Level with a touch of grit – and while remaining very quiet in the mix. Very impressive at its price.

EASE OF USE:
You need to apply some tweaking to ‘balance’ this pedal’s operation, since there are four potential boosts, but also three potential cuts (the main Level could be considered a ‘cut’ as well, depending on how low you place it). For example, full Level Boost is 20dB, but suppose you place it half way at 10dB; you would get that amount of boost only if all the EQ controls were placed at 12-noon (neither cut nor boost). If you decide you want a slight cut in bass, then the overall boost would be 10dB minus the drop in Bass (upward of -12dB). The same holds true of the Treble, in that keeping it ‘flat’ or cut/boosted will affect the overall Level boost.

I tend to keep the Level boost completely down or slightly up as I like to tweak the EQs for some modest boost; if I cut any of the EQs I may need to bring up the Level slightly. For instance, when I want to scoop the Mids I may need to up the Level slightly as the overall volume level drops due to the Mids cut. Further to the mids, there is a toggle switch that allows you to adjust a higher Mids frequency (800Hz flipped up) or a lower Mids frequency (400Hz flipped down). Consequently, cutting the high 800Hz mids will reduce the tone, whereas boosting it increases it. The same is true of the low 400Hz range, in that cutting it makes the tone lower and boosting it makes it higher. The difference is that you get more brightness and ‘sparkle’ with the higher 800Hz range. Which you choose, obviously, is based on the tone you want and the equipment you’re driving.

Where you place the Engager Boost in your pedal chain can vary, such as having it before or after dirt pedals. When it is located before dirt pedals I found the boosting and cutting less significant – even the Level control is not as pronounced. It becomes more of a subtle EQ and volume booster. When placed after dirt pedals, however, you can REALLY get some massive cuts and boosts (which is where I have it placed).

RELIABILITY & DURABILITY:
With a lightweight durable anodized aluminum chassis, the Engager Boost measures approximately 2.75 x 5 inches (7 x 12.5 cm). The plastic knobs feel of good quality, and when turned the pots feel unusually solid and smooth (very good quality). The cable input/output both are located on the sides, whereas the power supply insert (standard 9v 2.1 mm with a 50mA power draw) is on the back (where I prefer power supplies to keep them from harm’s way). The true bypass/buffer switch and the Controls’ LED light switch both are located in the back, as well. The footswitch is a good distance from any controls, and the small midrange toggle switch is positioned center of all the larger knobs. The jeweled LED ‘on’ light (a quality trademark on Fender amps) is of a fair size and of heavy construction. The spring-loaded battery door has a smooth operation and the associated springs produce a solid pull.