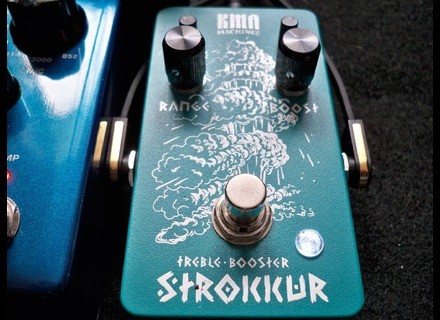 « More than a Treble Booster - a Virtual Tone Shaper! »
5

Value For Money : Correct Audience: Anyone
SOUND:
Unless you have dark pickups/amp/cab you may be wondering “why do I want to boost the treble in my signal.”

Strokkur produces surprising sound results and is not so simple as being merely a ‘treble booster.’ It sounds superior in the treble department than just upping your Treble via a guitar’s tone pot or through your amp (they sound ‘thin’ in comparison). First, Strokkur is a Germanium Booster and this makes the sound smooth, fuller and not harsh or brittle. Second, you can cut or boost either Treble or Bass to better suit your tone – the range of each (either cut or boost) has a very usable range that is not overly dramatic (you don’t hear large bass or treble drops or increases). Third, there is a Range that you can accentuate the Treble; when turned low you get a smooth glassy result, but as you crank the Range you get a broader width of sound that is meatier and with a tighter low end (sounds fantastic with high-gain chugging). Fourth, and this is the clincher, what Strokkur does is make the highs or Treble very clear in the mix – taking out any ‘thinness’ of the high-end and fattening it up. I matched Strokkur with various preamps and distortion pedals and it was complimentary in every instance – and in every instance the high-end became more distinct and thicker with a lot more harmonics. It certainly makes leads stand out, but when added to rhythms (setting from 9-o’clock to 12-noon) the crunch became even crunchier.

OVERALL IMPRESSION:
This pedal derives its name from the mythical country of Iceland and its famous geyser, Strokkur. Hand-built in Germany, Strokkur is an investment at 199 Euro, but what it does to a guitar tone makes it a worthy investment. Leads sing better and crunch tones become nastier as the high-end frequency thickens and cuts through the mix. Strokkur was designed though inspiration of the Dallas Arbiter Rangemaster, known for how it pushed tube amps to the edge of breakup with enriched harmonics. Strokkur does the same exceptionally well. With 17dB of available Boost, the ability to sculpt your tone with the Treble and Bass controls, and even define the incoming bandwidth via the Range knob to determine the nature of the Treble you’re boosting, and Strokkur is pedal destined to remain on pedalboards and out of the forum emporiums. Even if you don’t want to Boost your signal for leads or for any other purpose, Strokkur is a fantastic tone shaper and should not be categorized simply as a ‘Treble Booster.’

GENERAL USE:
You control the output or volume via the Boost knob, giving upward of 17dB of germanium boost for a smooth rich texture (which is why this Treble Booster does not sound brittle or harsh). The Range knob controls the incoming bandwidth – when turned up low (about 9-o’clock) you get a modest glassy type of finish to your tone, and as you increase the Range the sound becomes more broad and full (as harmonics increase). At higher ranges I tend to like it around 12-noon or slightly greater (depending on whether the signal is clean, crunchy or high-gain) to add more aggression or bite and depending on how full-bodied I want the higher frequencies while tightening up the lower frequencies. There are two EQ knobs, one for Treble and one for Bass. The Bass knob obviously cuts the low frequencies (2.4kHz), which takes out that sharp or piercing high-end and makes the higher-frequencies sound smoother while still allowing for the harmonics to pop through. When first powering up I suggest putting the two EQs at 12-noon, and the Range and Boost at 9-o’clock, and then adjust to taste.

OTHER DETAILS:
A regular-sized pedal, Strokkur measures about 112 mm (L) x 60mm (W) x 50mm (H) with knobs (4.4 x 2.4 x 1.97 inches). The heavy-duty powder coated die-cast enclosure is silkscreened and hand-numbered after an inspection and testing process. The image (and name) of the Strokkur geyser clearly suggests that your tone is going to explode with this pedal, which it does. KMA Machines uses double-sided PCBs that are designed, tested and assembled by the KMA engineers, to ensure a high-quality standard. Strokkur also has hand-selected NOS AC125 Tungsram transistors to remain true to the original inspiration of this pedal, the Dallas Arbiter Rangemaster. The two larger knobs (Range and Boost) are aluminum and will withstand normal use and abuse. The smaller Treble and Bass knobs also feel aluminum. All knobs have exceptional quality pots (smooth and very solid when turned). The footswitch (on/off) produces a solid click when engaged or disengaged. The cable input/output are located on the sides, whereas the power input is located in the back. Strokkur includes an internal DC converter to work with any 9VDC supply. It does not run on batteries and requires a 9VDC power supply while requiring 12mA of power.