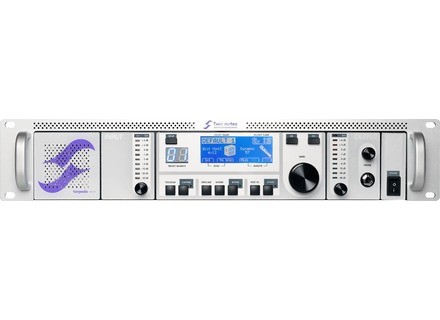 This is a cabinet simulator + microphone for guitar and bass amp.
Basically you plug the amp head in the Torpedo Torpedo and a sound card (with I / O SPDIF as well as how) and that's it!.

I know the team Two Notes from the music fair in 2006 and followed the evolution of the prototype until today, so I did not really read the manual, comprehensive though.

Setup is simple, but does not make you a sound engineer.
Editing sounds is a bit tedious on the machine itself, but the child is "remote" (soft control on the PC or Mac)

Downside: Perhaps too many adjustments, or rather the settings too late!
This is tripe move the microphone in every sense but in the end to the HP setting from 1 to 100 it is not too precise, too complete for small guitar?
Maybe 10 (see 3) positions in the depth and the width would be sufficient.
An idea for a Torpedo Light version?

Let me be clear this is the best product of its kind on the market today!

The only simulator that can reproduce both the nuances of the game, especially the "palm mute" in distortion, rarely played properly (with all the low and graouph) by another simulator.

A light years away from Palmer PGA04. I had one, friends have had (and are passed on Torpedo for that matter) so I could test the Palmer with different amps in different settings, nothing to see.
Without comparison with Line6 (I had a Pod 2), which has other arguments, starting with the price
I tested a few other apps and products Pod, they have for them the price, but its level is not playing in the same way.

A revolution (as well it rhymes with convolution) Two Notes that gives us that.
You may say that this kind of product already existed! Yes ... but no, not like that.
Here the concept is pushed into the corner, magnified.

In addition the team Two Notes is very responsive, attentive to the users. Adds regular speakers for free download.
Small personal pleasure, the baffles Fryette / VHT 2x12 Fatbottom and Fryette / VHT Deliverance 2x12 are mine, so I give it to model them. I can kick save "my" speakers ... not use it!
Joking aside if you have nice speakers, please enjoy the community of users Two Notes with them and see if it is possible to model them.

For one who has only preamps, there is the VM-202
For those who want a stereo Torpedo VB 101: LB-202, which coupled with the VM-202 VB-101 gives a stereo,
Finally Two Notes has released a version of software the IP-101
See the source
Did you find this review helpful?yesno
Cookies help us improve performance, enhance user experience and deliver our services. By using our services, you agree to our use of cookies. Find out more.