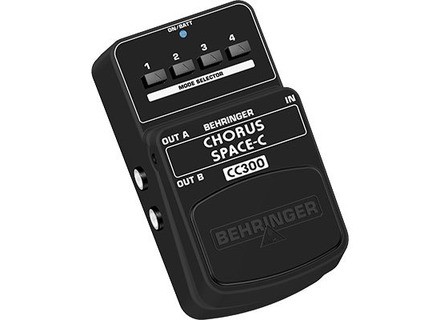 View other reviews for this product:
This is an analog chorus pedal made by Behringer. Behringer is a company that is, frankly, notorious for producing cheap products. That doesn't mean they don't sound good, however. This chorus pedal has a 1/4" input as well as stereo 1/4" outputs. It has a 9V battery but can also use a power supply. It is not rackable or computer-compatible.

Well, considering how cheap this pedal is, there's no surprise that it has an extreme lack of options. There are four buttons that can be pressed simultaneously and put into different combinations. There's actually more variety of tone in there than you'd think, although controlling the subtleties of each tone is pretty much impossible. I'd say that in some hands, this can be a really effective tool, but many other players might want more control over their sound.

The sound of this thing is what really sells it. I can't believe how this pedal can be so cheap and actually sound so good. The few sounds that you can get with this thing are all actually pretty awesome. There's everything from Bowie and T.Rex style light chorus to heavy Cure-style stuff on this thing. It covers a lot of ground for its limited function. And considering how cheap it is, that's a steal. It is a bit noisy but not to that bad of an extent. It actually does compress the signal a bit too, and not always in a good way. But it's overall a great-sounding pedal.

I don't really think that this pedal is going to last very long, as it's made of cheap plastic that could very easily break. This is the problem with most Behringer products. As long as you are super careful with all of your stuff, I guess this shouldn't be a problem, but I always seem to have trouble with those kinds of things, so I'd say be careful and be forewarned! I haven't had any problems yet but I anticipate them with dread.
Did you find this review helpful?yesno