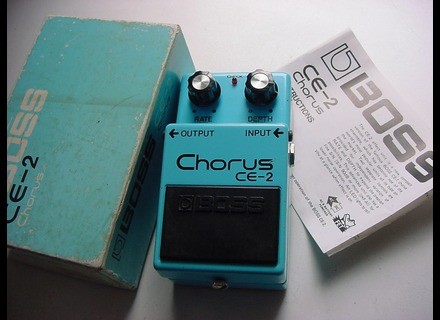 View other reviews for this product:
One of the great units from Boss back in the 80's. The CE-2 was the first compact pedal chorus from Boss. The CE-1 was released 1976 and contained the exact same circuit as the Roland Jazz Chorus JC-120 Amp. So to have the same specs as the Roland Jazz Chorus you are in good company. The Roland JC has been considered the best clean and chorus tone that has ever been produced. So this chorus is something to be revered. This was the pedal to have when playing a good clean tone or even needing a little thickening of the distortion guitar which was popular throughout the 80's. Metal guys would use this pedal to help beef up their overdrive tone and sweet the spectrum of frequencies up a little bit.

This pedal was produced in Japan up until 1988. They then took production over to Taiwan. Some say the tone changed but I think unless you A/B them and even still wouldn't hear any difference. The label on the back change from black to green while still in Japan. Then later changed to to Taiwan but kept the same green on the label.

I think this pedal shines in almost any situation it finds itself in. It sound superior with a clean guitar. You will get a nice watery shimmy tone that is almost magical to listen to. If you use it with an overdriven amp like a Marshall you get lighten up the control knobs a bit to add just a slight sweetening of the distortion. This will get you a big bigger tone much like adding an analog echo to the distortion tone. It is a nice tone filler.

This is a legacy pedal from Boss. This was the second introduction to the chorus world and the first compact chorus pedal ever produced from the Boss company. So this pedal can be put on a pedestal. This pedal was one of the best sounding chorus pedal in history. If you can score one then you will understand the tone to which many other manufacturers attempted to emulate.

These pedals were stopped being manufactured in 1988. They continued in Taiwan until 1990. So you would have to find one on the used market somewhere. They are great sounding pedal and some considered them the best chorus pedal that has ever been produced. If you score one somewhere you won't be disappointing.
Did you find this review helpful?yesno