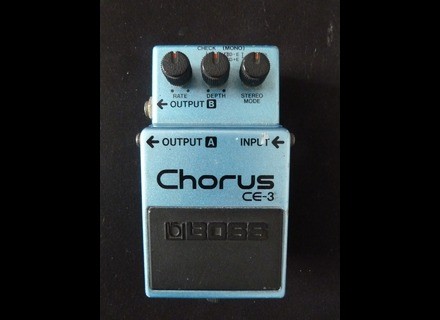 View other reviews for this product:
Boss chorus pedal, mine is made in Taiwan (or Formosa, for erudites and old dogs) and it's Green Label.
It has two controls, depth and rate, and a third one to output sound to two amps: so, two outputs. You can either output the chorus on both or the processed signal on output 1 and the "dry" signal on output 2.
And it's analog (you can hear it, you can't cheat on that)
Make sure you have a daisy-chain power cord because it uses the old system (12V) and if you connect it to a PSA, the LED won't light up completely and the sound won't be "whole."

It can't get any easier, that's the Boss trademark.
I don't have the manual, but there are no mysteries behind the controls.

I already have an analog chorus (on the VS h2o; I love the chorus) and, compared to the CE5 (which I also have, since I couldn't sell it), it's warmer.
The "hazy" chorus swirling is very characteristic, but also better and bizarre (I'd say a mix of sine and square waves), and even with the depth set to max, you won't feel dizzy.
I use it with the Fender Mustang and Tele (aerodyne, to be more precise), together with the DS2 SD 1, BF2 (the other analog one) and the boss DD 20, as well as a holier grail reverb, plus an Engl screamer Combo (I don't like to talk about it like that because it sounds very pretentious...).
Do note that even if using only one output and setting it to type II, the sound will be different.
It's fantastic to play in stereo. Some people say it has a low level, but I haven't noticed it. It's a bit noisy, but, honestly speaking, whose gonna notice during a gig at high volumes???

I've been using it for... 48h, so these are my first impressions.
Yes, I've tested several models, which I own and have in stock (VS h2o, Small Clone, CE5) and I'm a chorus fan.
Its simplicity and VERY distinctive sound are the trademark of this nice pedal. I don't regret having bought it. At a time when effects can be really expensive (but also very good), it's a god alternative and a convincing buy.
It's easy to slam BOSS, but it's still excellent shit (except for some disgraceful examples, like the MT2, but that's only my personal opinion!).
Did you find this review helpful?yesno
Cookies help us improve performance, enhance user experience and deliver our services. By using our services, you agree to our use of cookies. Find out more.