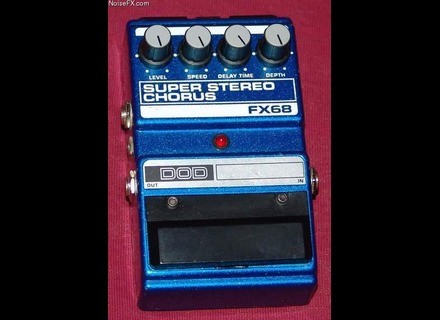 It's an analog chorus that has stereo outputs, but only a mono input. It is powered by either a 9 Volt battery or a power-supply. It should be noted that it uses an 18" headphone style plug for the power-supply, not a standard BOSS-style one. I know DOD was trying to separate themselves from BOSS and the likes, but the non-standard power jack is just annoying.

It's a fairly easy chorus to tweak, even thought it has some interesting controls. The Level knob (Which is really a Mix control) is fun to play around with dialing in different amounts of chorus. The Delay Time is another fun thing to mess with, changing how much the signal gets de-tuned is something not many chorus let you do. The only problem? It never went far enough, but more on that in a bit. The Speed and Depth controls are pretty standard, nothing special there.

Since I got it used I can't comment on how clear the manual is, because when I got it it didn't come with one. As I said though, it's a pretty easy chorus to dial in.

Here is where (Stock, my you) the pedal falls short. It was VERY subtle, almost being to the point where it really isn't any point to using it. I spent several hours tweaking knobs trying to get it to stand out, but it just wasn't happening.

I googled around for mods for this, and there really isn't much on it. I found a thread were some recommended replacing a cap with a higher value to make it more obvious by increasing the delay time. I replaced the stock capacitor with one several times it's size, and voila! It is now MUCH more obvious, and much more usable. It's a pretty 80's chorus sound, so if that's something you are looking for once modded this can do that well. It's not exactly the most natural sounding chorus out there, but it's not sterile by any means. Definitely very full and deep sounding.

I only gave it a 5 because I'm rating this for it's stock performance. But hey, maybe you are looking for a subtle chorus, then this very well might be the one for you!

Overall, after I modded it, I like it quite a bit, and use it quite often. I think it sounds better than the Made In Japan BOSS CE-3 chorus I have as well. I DEFINITELY got my $20 out of it, that's for sure. I love how good it sounds now that I modded it, and I also love how versatile it is. Besides standard chorus sounds, I can do some pretty whacked out space alien sounding stuff with the knobs dimed. I don't like that stock it was much too subtle for me, being to the point of being unusable. I also dislike that it uses that silly 18" plug for the power adapter.

I mainly play Thrash metal with some drop-tuned stuff thrown in, and I run a Peavey Ultra 60 watt tube amp into a 5150 Straight cab with V30's and G12T-75's. My main guitar is a BC Rich Warbeast NJ Deluxe with EMG's running at 18 Volts. I use the chorus for cleans and leads mainly, and it works great for me. Having used it for several months now, I would definitely buy it again!
Did you find this review helpful?yesno
Cookies help us improve performance, enhance user experience and deliver our services. By using our services, you agree to our use of cookies. Find out more.