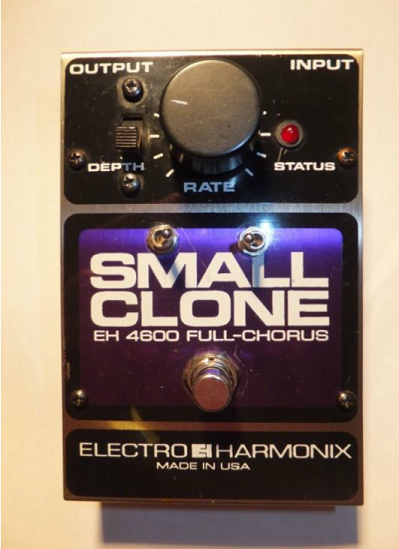 Chorus for Guitar from Electro-Harmonix belonging to the Clone series.

Publié le 11/14/14 à 05:52
Psyclone modification on the legendary pedal EHX is made in France by MSM Workshop alias William, a talented handyman who enjoys modding some of the most popular pedals (Boss and EHX in particular) for at least limit defects and sometimes completely transform.

The Psyclone is an EHX Small Clone to which we added two switches on the front, giving the missing sounds on the original model. It is therefore almost a multi-use chorus / flanger / phaser / vibrato / ring modulator according to the settings of the pedal. No digital edition of course, it's still an analog pedal.
In short, the simplicity of the original and its wide discretion pedal is preserved.
Revolution is visually discreet, but because it happens elsewhere!
All good so far, the defects can not be attributed only to the original model.

Again, the non-modified model is amazingly simple surpassed only by the Phase 90.
I will not dwell on the Rate knob (dosage) and the switch Depth (depth) - already well known users modulation pedals - to concentrate on the two switches added in the Picard workshop. One toggles between the original chorus and vibrato, the second enables the High Speed ​​function or disable it. In both cases, the simple manipulation of the two switches is childish, so no problem.
Rate the knob turns, meanwhile, in Speed ​​when the speed is on high. The switch retains the same depth function but then applies vibrato when activated.
Ultimately, despite the new sounds available pedal still retains this reassuring simplicity.

Ah! The sound ...
The new features allow new sounds, of course, as well as combinations of switches. The original chorus is always the same (see the reviews on Small Clone), still singing and new sounds keep this quality: that's where we see the expertise of the MSM workshop!
The first switch allows to switch between chorus and vibrato only the Rate and Depth retain their original function but a vibrato. This is a special effect that varies more or less rapidly the pitch of the note played. The sound is good and when you put the settings for a subtle effect, it's fantastic. I used very little because it is a fact that I do not really need, but it is very beautiful. When further, the sound is great too, but you have to have use.
The second switch enables the high speed function to double the speed of the vibrato or chorus then rotation (depending on the position of the first switch). At this time, the rate knob to manage the speed of the vibrato and it becomes perfectly inaudible from the half of the race as fast vibrato. Of late, one can even speak of Ring Modulator. It is very industrial and indie music so I used very little.

All sounds are fantastic, and remain in the vein of the original sounds EHX: Organic, having a particular color to suit all. Unfortunately, apart from a very slight vibrato, I use very little changes ... This is of course personal convenience, and sound quality deserves to be recognized!

I use it for a few months (ah holds not only one actually ...) and I loved the chorus and the fact that the volume does not increase by 50% when going from chorus to vibrato! Everything is assembled so that the spirit of the original model is preserved.
I had never used the Small Clone before buying but saw what I had been able to read, I knew she will admit me. Having heard of the wonders performed in this workshop I decided to buy a Small Clone and used in modified curiosity.
I have not (yet) found the utility changes, vibrato and high speed being rather special effects, but the quality is undeniable! For modulations during solos and prog psyche it should do the trick.
I wish you a very good luck to this talented handyman who rang the DS-1 and CS-3 Boss ^^ and I encourage you to take a look at the site, you may have a combo pedal and I assure you that it would be a much better investment than sell and buy another