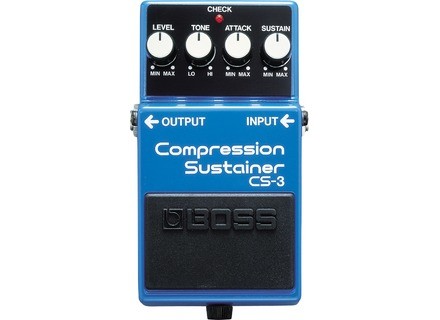 Buy this productView price information >
View other reviews for this product:
The BOSS CS3 Compression Sustainer is the third generation compressor pedal by the company and it basically is designed to do what the name implies. It compresses the signal going into the amp to give it a bit more punch and sustain to the sound. Lots of country and other real tone gurus use them and so I figured I'd give this famed unit a try. It features four controls which are level, attack, tone and sustain. It's housed in the typical BOSS casing and is powered by either a 9v battery or a power adaptor.

Setting up this pedal to get tones happening is pretty simple. BOSS has a great way of interfacing their pedals intuitively, which is great for first time users. That being said, I don't care for the tone of this compressor at all in its stock form. It has a very dead and lifeless quality to it that I just cannot get into. It might have been my particular pedal but I just found it to sound fairly anemic and not add the punch that I assumed it was going to.

Perhaps I'm spoiled by the boutique and vintage pedal market, but I honestly find it rare that BOSS makes a pedal (with a few exceptions) that sounds legitimately good. As I stated prior, I really just found this compressor to sound pretty bland and dull. I didn't hear any real chime or sparkle in the clean tones, nor any real increase in punch or sustain. The drive tones lost a lot of clarity and definition and overall I just ended up taking the CS3 out of my rig after about a week of fighting it to get it to sound good. It actually turned me off the idea of using a compressor for a long time and that didn't change unil I tried and subsequently bought a Diamond Compressor. I hear the nodded BOSS Compressors sound better than the stock ones but I've never tried those personally.

All in all I advise you to stay away from the BOSS CS3. it really doesn't improve the tone all that much and when put next to a REAL compressor like a Diamond, Keeley or vintage MXR, it's all but totally outclassed. I would personally much rather save up extra and get one of the above three comps as they sOund far superior to this BOSS unit by far.
Did you find this review helpful?yesno
Cookies help us improve performance, enhance user experience and deliver our services. By using our services, you agree to our use of cookies. Find out more.