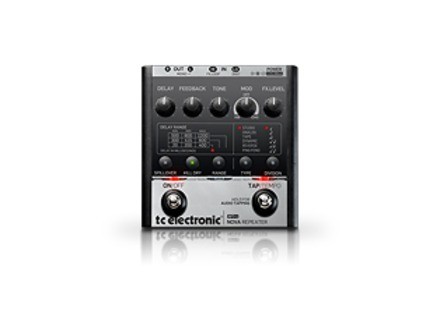 View other reviews for this product:
Nova Repeater RPT-1 (your wishes) is a format numrique delay pedals. Level connectivity is well thought out - from an LO signal to a low level (guitar) - from a HI if you put the pedals in the effects loop of your amp - a mono output - and a second for the stro (note that this will automatically activate the Stereo dernire for delays if you hook up a jack) - not making MIDI for the synchronization level, however rglage c &#39; is simple but powerful: Five knobs: - Delay for adjusting the tempo of rptitions - Feedback to many of these dernires - Tone of a delay to go darker shimmering - Mod is to add a vibrato effect is a chorus effect only on rptitions - FX Level and to mix the incoming signal in the PDAL and the level of delay over this five buttons: - Spillover can let the delay to finish his rptitions even if the effect is cut in order to attack another&#39;s - Kill cup dry the incoming signal and leaves out of the pedals the sound of the delay (with the nice reverse!) - Range interacts with the Delay knob (3 positions of the knobs [min / medium / max] corespond 3 delay time per section, and it was well done as can quickly find a delay time corresponding to a tempo classic record time - type allows us to choose between six delays: Studio (very bright and clear), Analog (analog delay simulation), Tape (tape delay simulation), Dynamic (a delay that made TC Electronic cl ber: the s&#39;crase delay when playing and the level rises when you let the notes breathe, it&#39;s really remarkable because a saturated sound suppresses ct draft), Reverse (plays to the delay), and Ping Pong (use when connecting to hear the Stereo Delay walking from left to right) - And finally Division: choose between 3 rptitions rhythmic patterns of black base / peak eighth / quaver triplet of the last two are subjec added the black to form a wide range of 6 choices rhythmic breathing the quality Two switches adorn the bottom of the pedals: - a switch is / Off - a tap tempo switch (note that it may be thanks Exceeds the limit of 1200 ms rglage the manual to get the legendary ... I limit the 2290 ms guessed it!) The food, as she is in 12V DC and 300mA request any of the same, so all the blocks of power supply will not be compatible.

TC had made hard with the Nova Delay, and it seems they DCID to provide a layer for more rfractaires programming. This time we use can not be intuitive: 5 knobs, five buttons, two switches and play! This is called the spirit "Plug and Play". Once we diffrent accommodates the controls, you get very easy for delays Varis excellent quality! In addition, the functionality of Audio Tapping Tap Tempo switch is gnial for those who have problem of synchronizing between their feet and their ears by pressing and holding the Nova Repeater will automatically DTECT the tempo at which you play and calibrate the delay accordingly. Note however that this will cut the time you release the switch.

J&#39;tais went to buy a store and delay pedals that convinced me that I could that I will integrate pdalboard. The face of Eventide TimeFactor I found it more intuitive, simple, but sound quality nanmoins with a very transparent, and a power edition outstanding! I come out with with sublime effects violoning just playing with the volume knob on my guitar, I can also be rhythmic crunch gniales thanks combination Studio delay in crooked black + point e, and I do not even clean sounds ... I think I&#39;m still far from having made the rounds of the craft. As for transparency I have not heard any diffrence between the sound that passes through the pedals, and the one trait numriquement. I was enough for me!

Edit: 07/05/2010:
APRS comparative pushed in a better in-store, the converters of the same when TimeFactor are well above those of the TC.
The sound of the TC seems a little more ple ct rptitions and emerge with less relief. So I drop in note 8.

Frankly, I find that the TC was high, especially considering the price of the beast! For the price of a Boss DD-7, you have a delay numrique transparent, intuitive and powerful! No syncro noon? No preset? Well for those who like computers and programming there is the Nova Delay, Eventide or competition that makes it more expensive for many trs. I am glad to pay for features that I did not serve <img class="smiley" src="https://fr.audiofanzine.com/images/audiofanzine/interface/smileys/icon_mrgreen.gif" alt="mrgreen" /> Adding that the "Spillover" and the delay "Dynamic" which are really two assets which I can not do without dsormais, well it gives us a product report fonctionnalitqualitprix exceptional. Conclusion: The Nova Repeater eat it, it&#39;s good for your health!

Edit: it is better to place it in an effects loop in Killdry the pedals n&#39;tant not totally transparent (I could test it in a mixer), it said the prev- reference sound is acceptable, especially if you have lots of pedals that are not truebypass.
See the source
Did you find this review helpful?yesno
Cookies help us improve performance, enhance user experience and deliver our services. By using our services, you agree to our use of cookies. Find out more.